Start a Wiki
watch 01:38
The Loop (Movies)
Do you like this video?
It's Tough to Be a Bug! is a nine-minute long 3-D short film based on A Bug's Life. Using theater lighting, 3-D filming techniques, audio-animatronics, computer animation, and various other special effects, the show gives the audience an idea of what it would be like to be a bug. Flik hosts the show and educates the viewer on why bugs shouldn't be seen as pests, but more as friends. The attraction opened in Disney's Animal Kingdom at the Walt Disney World Resort on April 22, 1998, a full seven months before the actual film debuted in theaters. The film's theater is housed inside the Tree of Life. The show was duplicated three years later in the A Bug's Land section of Disney California Adventure on February 8, 2001. The show was closed on March 19, 2018, in Disney California Adventure.

At Disney's Animal Kingdom, the Bug's Life theater is located inside The Tree of Life. As the queue winds around the tree, visitors can glimpse animal carvings on the tree that aren't visible from other vantage points. The "underground" pre-show area features posters of various bug acts from the show, as well as those for all-insect parodies of Broadway musicals, such as Beauty and the Bees, Web Side Story, Little Shop of Hoppers and My Fair Ladybug.

At Disney California Adventure, the Bug's Life theater is located in a bug's land. There, the queue passes through a replica of Ant Island before heading underground, where the queue appears the same as the one at Disney's Animal Kingdom.

The doors close, and the announcer tells the audience not to buzz, sting, pollinate or chirp during the show. Flik pops up upside-down from the ceiling. Then, Flik tells the audience to put their bug-eye glasses on and the butterflies fly away. The title card, a leaf that says "It's tough to be a bug!", appears. Then, jungle music begins to play, and a Mexican redknee tarantula (referred to as a Chilean Tarantula in the show) named Chili makes his appearance, surprising Flik. A pair of acorn weevils, along with Weevil Kneevil, place a slingshot on the stage and launch acorns from it. Chili shoots the first acorn with a quill, but fails to shoot the second due to Weevil holding on to it. Weevil then taunts Chili, who chases after him. The next guest is a soldier termite who defends his mound by spraying intruders with acid. A piece of the set (wood) falls with a rumble and the "Termitnator" steps out. The termite shoots at a taunting flea. Sensing more intruders, the termite shoots at the audience (despite Flik's protests) until he runs out of acid and leaves. Flik next introduces a stink bug named Claire de Room, who walks onto the stage. The acorn weevils place a flower as a target. Weevil re-enters the scene and crashes into the flower, causing it move towards the audience; Claire then passes gas, which affects and disgusts both Weevil and the audience.

An explosion is heard as Hopper, furious that Flik has allowed humans into the insect world, appears. A stag beetle chases Flik off the stage and four wasps hold up an ad for "Knock 'em Dead" exterminators. The wasps turn over the ad and use it as a makeshift movie screen to show clips from old monster movies featuring giant bugs. Hopper thinks that it's time for humans to have a taste of their own medicine, and a giant fly swatter attempts to flatten the audience. He then declares "This means war!" as the audience is sprayed with bug spray. As the theater goes colorful, wasps sting the audience, and several Black widow spiders go up and down, trying to capture and scare the wasps. Hopper says that nothing can stop him, but a chameleon appears and tries to eat him. Hopper, afraid of the chameleon, retreats.

Flik reappears and says that he forgot to mention about reptiles, which segues into the finale. Bees, dung beetles (The Dung Brothers), dragonflies and ladybugs sing about how insects help humans and about how "it's tough to be a bug". Weevil returns, holding a moldy cupcake, and the bugs chase him. The butterflies come back to form as curtains and Flik wraps things up, saying that magnifying glasses is for looking at little things, not for burning little things and the show ends. The announcer says that audience members should remain seated, so that the beetles, maggots, and cockroaches can leave safely. The bugs start to talk at once and the announcer says to pick up the "grubby things" before they exit. In the Animal Kingdom show, the female voice says to exit through the doors to the left, while the male voice says to exit through the doors to the right. The guests put their bugs eyes in the bins outside the theater and exit.

The show's score was composed and conducted by Bruce Broughton.

The theme song, "It's Tough to be a Bug," was written by George Wilkins with lyrics by Kevin Rafferty, and is available on Music from Disney's California Adventure.

Other characters include Claire De Room, Henry the Bee, Additional Singing. Speaking Voices and The Announcer appear speaking and singing, but their voice actors are unknown.

A statue of Hopper at California Adventure 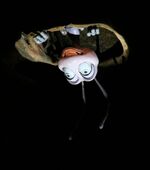 Official Promotional Poster for the show.
Add a photo to this gallery
Retrieved from "https://pixar.fandom.com/wiki/It%27s_Tough_to_Be_a_Bug!?oldid=193981"
Community content is available under CC-BY-SA unless otherwise noted.