"Beyond compare in the field of personal grooming, this classy cleaner shrimp maintains the highest standards of cleanliness. Jacques once belonged to the President of France, who gave him as a gift to the Australian Prime Minister, who then passed him on to the dentist."[1]

Jacques "decontaminates" new fish to the tank in the dentist's office. He also controls the "Ring of Fire" on Mount Wannahockaloogie, as seen when Nemo was given a royal welcome by the Tank Gang, who dubbed him "Sharkbait" after he successfully swam through the "Ring of Fire." Later, Jacques activates the "Ring of Fire" again for Gill, who shoots out of the tank and lands on Darla's head (which distracts her while she was shaking the bag that Nemo was in) to save Nemo from becoming Darla's next victim, like her previous fish Chuckles. It is unknown where the dentist got Jacques from. 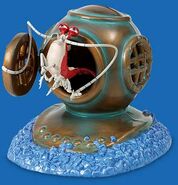 An sculpture of Jacques and his scuba headpiece