"I need scarers who are confident, tenacious, tough, intimidating. I need scarers like... like... James P. Sullivan."
—Henry J. Waternoose

James P. Sullivan, also known as Jimmy or Sulley, is the main character of Monsters, Inc. and one of the main characters of its prequel Monsters University. He also returned as a main character in the series Monsters at Work. He is a large mammalian monster with shaggy aqua fur with purple blotches, two small horns on his head, and a long tail.

"You're the boss. You're the big, hairy boss."
—Mike, as Sulley enters through the first door of the day

In the first film, Sulley was top scarer of Monsters, Inc., and was naturally afraid of humans, due to their rumored "toxic touch" that could kill the biggest monsters in an instant. That is until he met Boo, a human girl who found her way into the monster world and into the factory. Sulley, who was initially hesitant, became Boo's protector and obtained a fatherly role to the human, constantly worrying about her and protecting her from harm, while at the same time unlocking the secrets that humans were not as deadly as rumored. Starting by treating Boo like a pet, he eventually grew to care for her, the attention drawing away from a jealous Mike. Randall Boggs, Sulley's rival who also wants to be top scarer, tries to use Boo in an experiment to forcibly extract screams for the growing energy crisis that relies on their cries to provide, and risking his friendship with Mike, Sulley comes to her rescue and in the process discovers that a child's laughter is 10 times more powerful than scream. Sometime after Mr. Waternoose, the CEO of Monsters, Inc., is arrested by the CDA, Sulley becomes the new CEO and changes the policy to obtain children's laughter instead, apparently turning the energy crisis around.

In the short, after he sees Mike's new car, Sulley asks Mike what was wrong with the old car, to which Mike replied, "That's three little words, Sulley: Six-wheel drive!", then they both got in. Unfortunately for Mike, Sulley accidentally ruins the car by doing various different things, and Mike eventually told Sulley to get out, but ruined the car himself when he sped off.

An 18-year-old Sulley appears in Monsters University as an arrogant yet friendly monster who thinks that his family name and natural talent is enough to get him into the scaring business. He arrives on the first day of class at Scaring 101 unprepared, but unleashes a roar upon entering the lecture hall, impressing Professor Knight. Later on, he steals Fear Tech's mascot Archie the Scare Pig and accidentally climbs through the window of Mike Wazowski's dorm room, where they meet for the first time. Archie steals Mike's hat and both he and Sulley chase the pig all the way to the fraternity row on campus. Mike catches the pig but Sulley gets the credit, attracting the attention of Roar Omega Roar president Johnny Worthington III. Both Sulley and Johnny look down on Mike, the former believing he's not in the same league as him, sparking a rivalry. Sulley's laziness gradually costs him respect from Professior Knight and ROR while Mike studies hard, outpacing Sulley in the class.

On the day of the final exam, Johnny threatens to kick Sulley out of ROR if he doesn't pass. He proceeds to antagonize Mike, telling him he doesn't belong in Monsters University. The two begin trying to out-scare the other, causing them to inadvertently knock over Dean Hardscrabble's scare canister. She appears to take it well, but then decides to test the both of them herself. Sulley just roars at her before she can finish speaking, believing he doesn't need the knowledge that comes with scaring. Hardscrabble then fails him on the basis that his recklessness could potentially alert the humans to the Monster World. She also fails Mike, certain that he's not scary.

Sulley is angry at Mike, going to confront him at his dorm only to see him run out. Mike has gone to register himself and the Oozma Kappa fraternity - a group of misfits including president Don Carlton, Siamese brothers Terri and Terry Perry, New Age Philosophy student Art, and Scott "Squishy" Squibbles - into the Scare Games. Mike makes a wager with Hardscrabble: if OK wins, she allows all of them into the Scare Program; but if they lose, Mike has to leave MU. Sensing an opportunity, Sulley decides to join. As they need six 'bodies' and with no one else willing to join OK, Mike accepts. Sulley and Mike move into the OK house, forced to share a room.

The first round of the Games is the Toxicity Challenge, in which all the teams must avoid toxic stinging, glowing urchin-like balls in a darkened tunnel as best they can. Sulley and Mike's competiveness causes them to unknowingly ignore their teammates. They finish just behind ROR, but lose since the entire team had to cross. They survive elimination because Jaws Theta Chi cheated and were disqualified. Mike then appoints himself the team captain. Sulley doesn't have much faith in his team and walks off, dismissing Mike and his new leadership position.

The next challenge involves each team getting through the library without attracting the librarian's attention, retrieving their flag, and escaping. An impatient Sulley charges in to get the flag. Though his recklessness nearly costs them, OK again survives elimination. ROR invites OK to their frat house for a party only to get badly humiliated. When he sees his team ready to call it quits after a brief argument with Sulley, Mike takes them all to Monsters Inc, showing them that despite their differences, they could still become scarers. Sulley begins to see what a jerk he's been, causing him and Mike to understand each other better.

Oozma Kappa begin training even harder, with Sulley now accepting Mike's leadership, as a friendship begins to grow. Now working as a cohesive unit, OK survives the third challenge: a maze in which tests them in avoiding teenagers. OK finishes just behind ROR. The fourth challenge tests the teams hiding skills. OK and ROR both advance, pitting them against each other in the final challenge. Sulley catches up with Hardscrabble hoping to bury the hatchet. She tells him that one member of his team is not scary, referring to Mike. Sulley defends him, but he himself has doubts. Sulley gives Mike some tutoring that night, but secretly finds himself agreeing with Hardscrabble.

In a stadium, Oozma Kappa and Roar Omega Roar face each other in the final challenge of the Scare Games: both teams must out-scare the other using two scare simulators set to their highest levels. Sulley suggests that Mike go last. Sulley faces Randall Boggs in the penultimate round, with the former causing a small earthquake in addition to his usual roar, generating a high score and causing Randall to get a low score. This is where their rivalry began.

Mike goes up against Johnny, and to everyone's surprise, OK wins the games. Unfortunately, Mike discovers that Sulley tampered with the simulator so that Mike could win. Sulley lets slip his lack of confidence in Mike, who then walks off. A guilty Sulley confesses to Hardscrabble, just before an alarm sounds to a break-in at the MU door labs. He immediately knows it's Mike's doing and goes through the door to rescue him, finding himself in a girls' summer camp. He is mistaken for a bear by forest rangers, forcing him to run. He finds Mike by a lake, having failed to scare a cabin full of little girls. Sulley tells him he understands how he feels, causing Mike to lash out that he can screw up and still be loved by everyone. Sulley admits that while he acts scary, he's really been terrified. They both head back to the door, but they are trapped as Hardscrabble has deactivated it. Mike thinks that they can generate enough scream energy to activate the door. Sulley is not confident in scaring the rangers outside, so Mike tells him to follow his lead. Mike's knowledge and Sulley's natural talent are enough to scare the rangers, activating the door and overloading every scare canister in the lab. They make it back as the door explodes, but they are both expelled for their actions.

Sulley and Mike say goodbye to their frat brothers, who have been admitted into the scare program by Hardscrabble. Mike leaves by bus, willing to settle for "just being okay." Sulley stops him, telling him that he shouldn't settle for anything: he made the deal with Hardscrabble, he took a team of misfits and made them champions, and Sulley didn't even bring a pencil on his first day. Sulley tells Mike that while he is not scary, he is fearless, beginning to talk about Hardscrabble not being able to see that. She arrives at that instant, telling Sulley to watch his mouth. She admits that they surprised her, something she didn't think was possible. Hardscrabble can't do anything more for them, except wish them luck. Mike notices a Monsters Inc. ad in the paper, suggesting they work in the mailroom. The duo then get promoted to janitors, kitchen assistants, can wranglers, and as open tryouts are announced, Sulley tries out, finally becoming a scarer with Mike as his assistant. Both he and Mike are rookie of the year.

In the first film, although his job is to scare children, Sulley makes efforts to befriend Boo, and then goes to extreme measures to protect her from Randall. It is Sulley who realizes that making children laugh is a far better way to produce energy than making them scream, thus solving Monstropolis' energy crisis.

Sulley is also very loyal to Mike, going so far as to lend him "odorant" and making reservations for him at an exclusive restaurant on the birthday of Mike's girlfriend, Celia Mae.

Sulley also attempts to cover for Mike when Mike realizes that he has forgotten to turn in his paperwork. In return, he relies on Mike to help him in his madcap efforts to keep Boo safe from Randall and get her home, although unknowingly and unwillingly annoying Mike and underrating the consequences that it could have on both their lives. When Mike protests, Sulley chooses to help Boo over appeasing Mike's pride; his choice is justified when Mike later changes his mind and comes to help him and Boo.

Despite his size and talent at being scary, Sulley is not easily angered or even easily annoyed or offended, he is actually a little clumsy and awkward but very likeable and good-natured.

In the prequel, as a freshman in MU, however, he was arrogant and a little ignorant; in his attempts to join Roar Omega Roar, Sulley was willing to humiliate Mike - a much better student in theory - in the opinion that just being a Sullivan, a family that is famous for their brilliant Scarers, was enough to succeed. However as time and circumstances forced him to befriend Mike, he realized that although not scary, Mike was a good friend with huge talent.

The simple beginnings in the Scary business, first being mail delivery, then moping floors, to working at the cafeteria at Monsters, Inc made him a lot more humble, willing to give praise to others and becoming a very nice sportsman even offering a handshake to Randall, his professional rival. 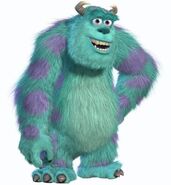 Sulley as the new CEO of Monsters, Inc.


—Sulley looking in on Boo at the end of the film.

Sulley being scared by Boo 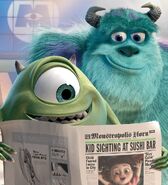 Sulley in Brave (in the bottom right corner)

Younger Sulley from Monsters University as compared to his older self in Monsters, Inc. 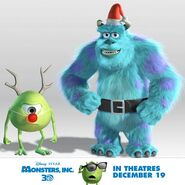 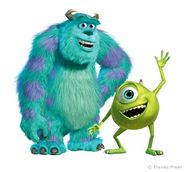 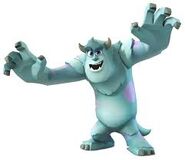 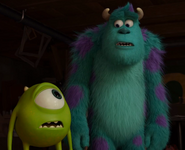 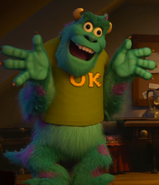 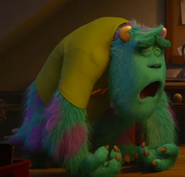 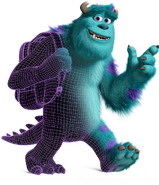