Jeff Gorvette is a character in Cars 2 and Cars 3.

"Jeff Gorvette is one of the greatest American racecars alive today. Donning the stars and stripes of his country's flag, the #24 Corvette C6.R has proven his ability to succeed on the big ovals and the road courses of the Grand Touring Sports circuits. Having moved from his hometown of Vallejo, California to Indiana to be closer to the racing world, Gorvette's ability to accelerate at such a young age has turned hoods wherever he competes. His championships and number of victories are unmatched, making him a respected competitor-and legitimate threat-at the World Grand Prix."

In the movie, he is first seen at the Tokyo welcome party with Lewis Hamilton, and he greets Lightning McQueen. He sees Mater talking to the Zen Master. He appears in all 3 races including the one in Radiator Springs. He never got hit by the lemons' camera in any of the races. After the World Grand Prix Tokyo race begins, he started in the 4th position and was also last seen in the Tokyo race in the 5th position. But as well as we can see, Nigel Gearsley finished in the 5th position. In the Porto Corsa race, Jeff was seen in the in the 5th position instead of Nigel Gearsley. And later in the second part, he was seen in the 8th position. At the last meters to the finish line in the Porto Corsa race, Jeff Gorvette along with Lewis Hamilton was at the last position. But he and Lewis Hamilton didn't finish the race, because Shu Todoroki's big crash blocked the track. He and Lewis were the only racers who didn't collide into the big crash. In the last race in London, Jeff was seen following Nigel Gearsley from the 6th position to the 5th position. Right before the race in Radiator Springs, he says to Lewis that he thinks they should do it every year. In the race, he and Lewis were next to each other in position.

Jeff Gorvette makes a cameo in Cars 3. He is interviewed before the Florida 500 and wishes McQueen good luck. Gorvette has retired at the time of the events of the film, and holds the highest number of top ten finishes for a racer.[1] His livery is also different, he no longer has WGP Logos or numbering, nor his US Flag Design. But instead, flames.

Retrieved from Stitch Kingdom via the Web Archive.[2]

In international versions of Cars 2, Jeff Gorvette is replaced in one scene by a completely different character, voiced by a regionally better known racer than Jeff Gordon.[3] However, they only replace him in the scene where Lightning meets him at the party in Tokyo as well as when that scene appears in Mater's nightmare. They don't replace him in the races or when the racers are shocked at Mater drinking from the water fountain after eating a lot of wasabi. Most of these characters use the same body shape as Max Schnell. These include:

Jeff and Lewis braking before the crash at Porto Corsa

Jeff and Lewis racing in the Radiator Springs Grand Prix

A faint shot of Gorvette's pitties

Jeff Gorvette at the Florida 500 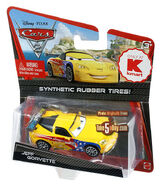 Jeff Gorvette in a Cars 3 2-pack with Strip Weathers 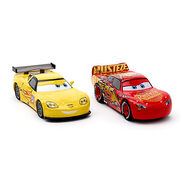