"Everyone knows that high-profile races are fueled by the cars behind the racecars. Joining the ranks of the World Grand Prix is John Lassetire, who’s the pit crew chief behind #24 Jeff Gorvette, a U.S. champion and a contender in the global competition."[1]

"John is a legendary crew chief, having extensive team experience in both the Piston Cup and the American Grand Touring Sports racing classes. Known for a cool head under stress, decisive leadership, and the ability to get the job done, John has that golden clutch. All these skills led to his being paired with his longtime friend in racing, Jeff Gorvette. Now the winning pair is gearing up to take it all at the World Grand Prix."[2]

"John Lassetire, the Truck with the Golden Clutch, is a legendary crew chief know around the world for his successful partnership with Jeff Gorvette. After all the excitement of the World Grand Prix, John decided it was time for a vacation, and he thought what a better place to cool your tires than Radiator Springs? Upon his arrival, Ramone gave him a fresh coat of paint and vintage wood siding, then Luigi and Guido set him up with the best set of whitewalls money could buy. Even though he was on vacation, John couldn't steer himself away from the racing world for very long, and as luck would have it, the Radiator Springs Grand Prix came to town while he was visiting. Unsurprisingly, JL took a liking to the charming town and decided to rest his bumpers there after the races were over."[3]

John Lassetire is an all-American pick up truck. The truck he is most likely modeled after an early 1990s Chevrolet S-10 Pickup Truck.

John can be spotted in his pit stop at each of the World Grand Prix races. He also appears at Radiator Springs attending at the town's Grand Prix, sporting a very different paint job, decked in green, with wood panels.

Appearance at the Opening Ceremony of Cars Land

John Lassetire made an appearance at the grand opening ceremony of Cars Land. While John Lasseter was talking, John Lassetire appeared on the screen, telling him about an idea for a new Cars Toons, which would be about a green truck with wooden doors (himself). However, John Lasseter tells him that he's busy and that he can call his office later on.

This appearance fully confirms that the green wood-paneled pick-up truck at the end of Cars 2 is really another appearance of John Lassetire, which implies he changed his paint job after the WGP ended.

He has just one line in the movie: "Jeff, your tires..."- After this, the other crew chiefs speak in﻿ different languages. 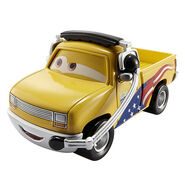 John at the World Grand Prix

Retrieved from "https://pixar.fandom.com/wiki/John_Lassetire?oldid=112243"
Community content is available under CC-BY-SA unless otherwise noted.