Jonathan "The Jaw" Worthington III is the main antagonist of Monsters University. He is a dark purple demon-like monster with sharp teeth and two demon-like horns.

He is the rival of Mike Wazowski, and the confident president of Roar Omega Roar (RΩR), a Monsters University fraternity that prides itself on its notable Scarers. His antagonistic role in the film comes from him frequently belittling the Oozma Kappa (OK) fraternity.

"Johnny Worthington has reason to be supremely confident—he’s the top Scare student at Monsters University and president of the best fraternity on campus, Roar Omega Roar. Johnny comes from a long line of MU Scarers and respects the school’s legacy, traditions and most of all, the system by which Scaring excellence is judged. He may have been born with a silver spoon in his jaws, but this monster's no softy."[1]

Johnny Worthington first meets Sulley and Mike after the two have been led to the Greek row by Archie the Scare Pig. As other fraternities are trying to get Sulley to join them, Johnny welcomes Sulley and takes him to be a Roar Omega Roar. When Mike tries to attract his attention, Johnny "kindly" tells him that he would be better with Oozma Kappa, the weakest-looking fraternity.

As the semester goes by, the RΩRs are increasingly disappointed by Sulley, who performs poorly in the Scaring class. Johnny finally signifies to Sulley that if he fails the final exam to Mike, he will be removed from RΩR.

Johnny is with the RΩRs on the subscription day for the Scare Games, and laughs when Mike presents himself to the competition. The RΩR have great success at the games, coming first at all challenges. However, against all odds, Oozma Kappa somehow stays in the competition after two rounds.

The OKs are invited to a party at the RΩR house that will actually be their doom. In front of everyone present, Johnny congratulates the OKs of how good they did in the Scare Games and invites them to the stage. But when OK are on stage, Johnny tells his brothers to spill on them paint, glitter and flowers. Randall showers stuffed animals on them and Chet photographs them. Johnny and the RΩRs open a stand next day and massively sell products featuring the embarrassing picture, supposedly to collect funds for a "good" cause.

When they see the OKs continue to perform better and better at the Scare Games, Johnny and his crew are increasingly upset, but hope to get the last word at the final race, which tests how scary a monster really is. At the last race, the fight between OK and RΩR is intense. Johnny is highly irritated by Randy's failure. Johnny is on the last and decisive face-off, where he is against Mike. Confident of his win, he repeats one last time to Mike his place is not here, and then proceeds to get a near-perfect score. But Mike gets the maximum score, a full scream can, beating Johnny and bringing the victory to OK, much to Johnny's shock.

Following the race, Johnny tries to bring Sulley back to RΩR at the place of Randy, but Sulley refused and turned away.

During the credits, it is shown that Johnny got a job as a scarer at Fear Co.

Johnny Worthington briefly appears in Party Central. He enters the hall of the RΩR house, preparing to greet his guests, but he is shocked to see instead the room empty of both monsters and supplies.

As president of RΩR, the premiere campus fraternity, Worthington is very selfish and only interested in having "the most elite" Scarers in his fraternity, inviting James P. Sullivan to join, as the latter comes from a family of successful Scarers, but mockingly denies Mike Wazowski and suggesting he join a fraternity that's "more his speed."

Worthington clearly cares more for his fraternity's reputation (taking grades and academics into account), when he threatens to kick Sulley out of RΩR if he did not beat Mike in the final exam. When Mike and Sulley are both kicked out of the Scaring Program by Dean Hardscrabble, Worthington and his frat-boys leave without a word to Sulley.

His rivalry towards Mike escalates when, right before the Scare Simulator, Worthington arrogantly tells Mike not to take losing so hard and that "he never belonged in the Scaring Program anyway." Mike wins the Scare Games due to Sulley's tampering of the settings, thus humiliating and surprising RΩR in its defeat. However, an opportunistic Worthington finds the gall to invite Sulley back into RΩR, only to be rebuffed. 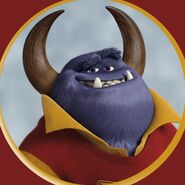 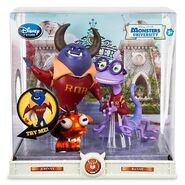