Mach Tony Kobayashi
Kabuto is the main villain of the Cars Toons episode Tokyo Mater. He is a Japanese drift racer that Mater races against. He also makes a cameo appearance in Cars 2.

When Mater reaches Tokyo he runs into Kabuto who challenges him to a drift race. After Mater gets modifications Ito-San tells them that they must race to the top of Tokyo Tower, and the winner will be crowned "King of all Drift Racers." He also tells him that the loser will be stripped of all modifications. When the race begins, Kabuto tries to cheat his way to victory by constantly pushing Mater away and when that doesn't work, he summons his ninjas to attack Mater. Fortunately, the ninjas are all defeated by Dragon Lightning McQueen. Mater soon catches up to Kabuto and he furiously pushes him off the Tokyo Tower, but Mater catches onto the top of the tower with his winch, hauls himself back up and wins the race. In the end Kabuto is stripped of his modifications and is last seen being laughed at by his own ninjas and several other cars.

Kabuto makes two cameos  in Cars 2, first when Lightning McQueen is driving through Tokyo with Mater and his team, and then at the welcome party for the World Grand Prix.

Kabuto is seen with all his known modifications, even though he is shown to have lost them in Tokyo Mater. This could be seen as evidence that the events of Mater's story were made-up and did not actually happen (it can be noted that Tokyo Mater is the only Cars Toons episode in which Mater fails to efficiently prove his story was real). However, another suggestions is that he got his modifications back shortly after if the story did happen, presumably through part-time jobs. 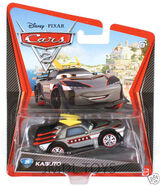