Pete Docter (gobble-y sounds)
Kevin is one of the two tritagonists of Up. She also appeared in Dug's Special Mission as a supporting character.

Kevin is a thirteen foot (3.96 m) tall giant tropical bird of the species that Charles Muntz has been searching for for many years.

Russell, who finds the bird along the way, immediately decides to name it "Kevin", though it is later revealed that Kevin is actually a female (Russell still calls her "Kevin" long after the fact).

Apparently, Kevin also likes chocolate as she kept trying to take a bite out of Russell's chocolate bar and can be lured using chocolate.

Kevin is eventually captured by Charles Muntz but rescued with the help of Carl, Russell, and Dug.

By the end of the movie, Kevin returns to her three babies.

Kevin appears in Dug's short as a supporting character.

Not being able to talk, Kevin has a very strong personality. She (like most animals) is friendly to those who have been friendly to her, but she will act hostile when she feels threatened, such as screeching at Carl Fredricksen when they first met, and she openly tried to attack Dug, pinning him down and screeching at him, her feathers rising in agitation. However, she can be playful and affectionate, such as gently tossing Russell into the air and nuzzling him affectionately. 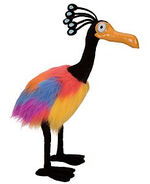