Kevin Racingtire is a character in Cars. He races for the team "Shifty Drug."

"With little natural athletic ability, knowledge of racing's rich history, or understanding of its complex rules, it's a wonder Kevin Racingtire has been able to sustain himself in the Piston Cup circuit for as long as he has. He attributes his success to his family, particularly his father-in-law, who is the owner of the large pharmaceutical company that just so happens to sponsor the team he races for."[1]

Racingtire smashing into another car 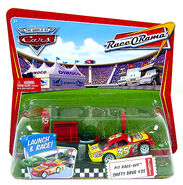 Lightyear Launcher die-cast.
Add a photo to this gallery

Retrieved from "https://pixar.fandom.com/wiki/Kevin_Racingtire?oldid=174650"
Community content is available under CC-BY-SA unless otherwise noted.