Cars 2
Kimura Kaizo is a character in Cars 2.

"Kimura is an accomplished calligrapher and one of the most precisely tuned SUVs you'll ever meet. It's rumored that he has never made an incorrect call in a sumo match - just another reason why the Japan Sumo Association is lucky to have Kimura-san as one of their top-ranked gyoji referees. He keeps the fight rolling along, calls a wrestler in or out-of-bounds, and when his gunbai war fan points, the winner has been chosen. No questions asked."[1]

Kimura Kaizo is seen at Tokyo, supervising a fight between Pinion Tanaka and Kingpin Nobunaga.

On the triptych poster 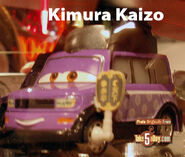 Kimura's die-cast
Add a photo to this gallery

Retrieved from "https://pixar.fandom.com/wiki/Kimura_Kaizo?oldid=130414"
Community content is available under CC-BY-SA unless otherwise noted.