King Fergus, frequently dubbed the Bear King, is the king of the Kingdom of DunBroch in the film Brave. He is also the father of Princess Merida and The Triplets and the husband of Queen Elinor.

"King Fergus is a heroic warrior with a majestic bear cape, broad sword and a knobby peg leg – the result of his much-regaled skirmish with the demon bear Mor'du. His vendetta against the beast who took his leg makes Fergus a ferocious and determined bear hunter, evidenced by a home full of mounted trophies of every size. Protector of his kingdom and family, Fergus has a heart as big as his triplet sons are mischievous and boundless love for his wife, Queen Elinor. But his pride for his first-born daughter Merida is unmatched, and he has gifted her his great skill and passion for the sword and the bow."[1] 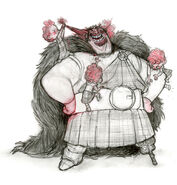 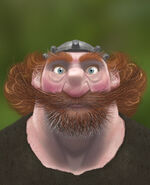 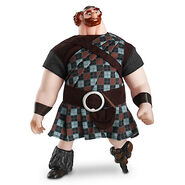