3 minutes, 47 seconds
Knick Knack is Pixar's fifth short film. It was released in 1989 at SIGGRAPH and then released on May 30, 2003 with Finding Nemo in theaters. It was even released on October 20, 2006 with The Nightmare Before Christmas in 3D. It was the last pre-Toy Story short and the first one to be originally shot in 3D.

In the short, a snowman named Knick in a snow globe wants to get to a pretty Sunny Miami knick-knack. He tries various methods to escape. First, he tries to bust the dome with the igloo in the globe. Being flat plastic, it just floats to the bottom. Next, he tries using his carrot nose as a chisel with a hammer on the dome wall. This just gets his nose out of joint in that it ends up bent. Next, he tries to jackhammer through the globe floor. This just results in all of his facial features being vibrated off. He then tries to use a blowtorch to weld a hole in the globe. This just results in him being shot into the other side of the globe. Finally, he sets up a large stack of explosives and hides behind the upturned igloo. This results in everything, him, the igloo and snow, getting swirled around the globe. During all of these incidents, Sunny Miami gets more and more bored, while the other knick-knacks begin to take notice of said incidents. After the swirling stops, he notices his snow globe is partly over the edge of the shelf. He looks down at the edge and this tips him over the edge, literally. Knick tries running in the globe in panic, but this just rotates the globe. Soon, he notices a hatch in the floor of the globe, which is now above him. This gets him free from his watery prison. He falls off the screen and a plop sound is heard. It is then shown that he has fallen into a fish aquarium. He is still in water, staring crossly at the camera. He looks to his left and sees a pretty Sunny Atlantis knick-knack. He gets a lustful look on his face and begins walking towards her. At this point, the snow globe falls into the water, putting Knick inside through the hatch, which then closes. He, entranced by Sunny Atlantis, doesn't notice until he bumps into the dome wall, at which point he looks around and, realizing where he is, again looks crossly at the camera.

Knick ready to try jack hammering his way out of the snow globe.

The "Sunny" Location knick knacks look on as Knick attempts to escape his snow globe. 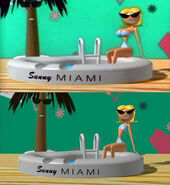 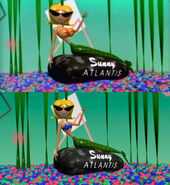 Whilst Hamm changes the channels to find an Al's Toy Barn commercial in Toy Story 2, Knick appears falling from the shelves.

Sunny Miami's cameo in Up.