Kori Turbowitz is the field reporter for the RSN Network in the 2006 Pixar film Cars. She appears three times in the film: when interviewing Lightning after the first race, announcing his trailer's arrival in California and finally as a non-speaking appearance in the crowd of reporters when Chick Hicks is celebrating his victory after rearending the King off the track. Like everyone else, she is disgusted with Chick's behaviour and attacks him with rubbish and debris to make him leave.

"The smoky-voiced Kori Turbowitz started her career off as a voicemail operator. But her delivery of "You have...THREE new messages" was spoken with such flair and irreverence that the next thing she knew, she was the number one radio host in the Bay Area, and one of the top Piston Cup reporters on television."[1] 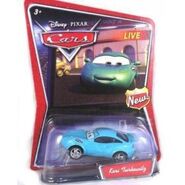 Kori's die-cast.
Add a photo to this gallery

Retrieved from "https://pixar.fandom.com/wiki/Kori_Turbowitz?oldid=184045"
Community content is available under CC-BY-SA unless otherwise noted.