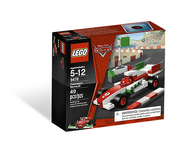 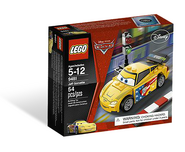 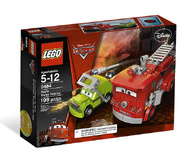 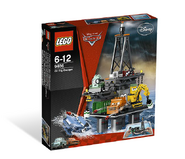 On the LEGO Cars 2 official website, there is a series of videos called Mater's Brick Tales. The only characters who talk in them are Mater and a computer, but other characters appear too. They start with Mater enjoying a regular day in Radiator Springs, but then he gets called on a spy mission. A spy screen tells him that Grem and Acer are doing something bad, and that he must stop them, and a bunch of robotic arms suit Mater up, and then they send Mater back to Radiator Springs. There, Mater tries to defeat Grem and Acer, and he ends up by somehow getting Grem and Acer fallen apart. After Mater finishes his mission, something funny happens at the end.

The Big Race was happening in Radiator Springs, and everyone was there to see it. Mater was there too, rooting for his best friend Lightning McQueen to win. But then, Mater was called on a secret mission. He went down on an elevator, and a replica of him was placed in his spot. Mater went down so far and found himself at a secret spy lair with Finn McMissile, Holley Shiftwell, and a Secret Spy Screen. There, the secret spy screen told him that Grem and Acer are out to sabotage the race, and that he must stop them. Then a bunch of robotic arms got him ready for his mission, including taking his tow cable and putting in a new one. Before Mater can say anything else, the elevator then sends him back. The racers were about to pass, so Mater unfolded some binoculars out of his tow hook, and saw that Lightning was in the lead. Then he saw Grem and Acer chasing the racers with guns. He realized they were gonna hurt the racers, so he folds his binoculars back in, got through the crowd, and unfolded a rocket out of his tow cable, sending him into the air. Mater didn't know how to control the rocket. Then he passed Grem and Acer, who each fired missiles that then followed Mater. The missiles followed Mater. However, he then turned around, and passed Grem and Acer again, who got hit by their own missiles, completing Mater's mission. Now there was one more problem: How is Mater going to stop and land?

Mystery of the Missing Parts

It was a beautiful day in Radiator Springs. Mater was driving around, saying hello to his friends. He was noticing that they were looking kind of different. Then, an alarm came out of the ground, and the road shot Mater into the air, and he landed in Siddeley. There, the secret spy screen told Mater that Grem and Acer are stealing car parts near Radiator Springs, and that he must stop them. Then a bunch of robotic arms suited Mater up, including putting something on top of Mater. Then Siddeley dropped Mater down, and Mater landed safely. So, Mater went all around Radiator Springs, trying to find the missing car parts. He looked everywhere, but finally, he found them. When he got there, Acer appeared in front of him. Grem was behind him, and he unfolded a bunch of robotic arms and weapons. They were closing in on Mater, but then Mater unfolded a magnet, which took all of Grem's robotic arms and weapons, and parts of both Grem and Acer, and dropped them on the ground. He completed his mission. He got everyone's parts back, but he got mixed up, and everyone had someone else's parts.

Mater was driving near the mountains of Radiator Springs. He said that today was an ordinary day. Then he saw Acer, whom he didn't know was Acer because Acer was disguised as a granny. Mater noticed that Acer had lost a wheel, so he decided to help him. Grem was hiding behind Mater. When Mater was about to help Acer, Grem pushed Mater off the cliff. Acer put his tire back on himself and high-fived Grem. However, Mater used his rockets to stop him from crashing into the ground. Mater was having so much fun flying and even called himself an airplane. When Grem and Acer saw him, they each shot a missile at him. Mater, being chased by the missiles, realized that flying wasn't as easy as it looks. He was having trouble controlling the rockets and changes his mind about being an airplane. While still unable to control his rockets, he caused the missiles to blow up Grem and Acer. After Mater landed, he couldn't believe that he did everything that happened.

So far, this is the only episode where Finn McMissile, Holley Shiftwell, and the secret spy screen didn't assign Mater his mission. And so far, there are only three episodes, to which it is unknown if more will be made or not.