Larry Camper is a supporting character in Cars.

"Larry and "R.M." are the best of friends: these two can usually be found raising Cain and takin' names on Redneck Hill. But despite their rowdy nature they are true southern gentlemen, and dead serious when it comes to racing. They know the stats on every team, which is useful since they've always got a bet riding on who will be the next Piston Cup champion."[1]

Larry and R.M. can be seen among other caravans at the Motor Speedway of the South. Later, they appear when Lightning McQueen spins onto the infield after he was hit by Chick Hicks. Larry cheers on McQueen as he then gets back onto the track.

Larry and R.M. also attend at the Los Angeles International Speedway, where they are seen next to Albert Hinkey. When the crowd notices Doc Hudson, Larry tells R.M. that Doc is there.

"What a ride! Go get 'em, McQueen! Go get 'em!"
—Larry cheering on McQueen as he slides onto the infield and gets back on the track.

Larry: "Whoa! Look, man. It's the Hudson Hornet!"
Albert Hinkey: "Whoa!"
R.M.: "Well, dip me in axle grease and call me Slick! It surely is."
—Larry, Albert Hinkey and R.M., as they notice Doc Hudson. 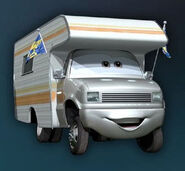