"Legs? You're with Ducky."
—Woody calls for Legs and assigns her to go with Ducky

Legs is a character from the Toy Story series, appearing in Toy Story, and the Toy Story Treat short "Go Fish." She is composed of two fashion barbie legs (from one of Hannah dolls) attached to a toy fishing rod.

Legs was first seen in Toy Story when Woody was exploring Sid's room, going after a fallen yo-yo, then fishing a severed Janie Doll's head out of a vise with the help of Rockmobile and Pump Boy. Initially thought to be a cannibal, the mutant toys later turned out to be friendly after they fixed Buzz and repaired the Janie and Pterodactyl. After Sid takes Buzz outside to be blown up, Woody rallies the mutant toys to stop this and teach Sid a lesson as well. Woody assigned Legs to go with Ducky through the air vent and remove the porch light. From there, Legs lowered Ducky to ring the doorbell, giving Woody a signal to create a distraction for Sid's dog Scud by having the dog chase the Frog, sent out by Woody, out into the porch. Ducky caught the Frog, and Legs reeled them back up. They later caught up with the rest of the toys in the backyard through the drain pipe. The toys then moved into their final positions while Sid wasn't looking; Legs and Babyface climbed to the top of the clothes line, and when the toys revealed to Sid that they were alive and could see everything, Legs lowered Babyface onto Sid's head, scaring him. After Woody finally scared Sid out of his senses, Sid retreated back into his house and the toys rejoiced.

In the Toy Story Treats short "Go Fish," Legs is at Andy's house playing go fish with Woody, Buzz, Rex and Hamm. Legs is shown to enjoy drawing by literally casting her reel to pick up a card.

Legs appears in the Toy Story video game in the level "Battle of the Mutant Toys." On top of Sid's workbench, Legs is one of the mutant toys Buzz and Woody have to fight through to get by. 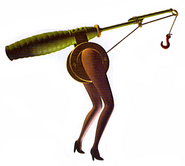