Lewis Hamilton is a character in Cars 2.

Lewis Hamilton, the famously sleek and seriously fast #2 Grand Touring Sports champion, has been a determined and winning racer for nearly his entire young life. Like all youngster cars, Lewis spent his childhood going to school, taking karate lessons and winning the British Karting Championship by the age of 10. Today, the celebrated native Brit continues to bring an exceptional work ethic and soft-spoken confidence to the race course where his extraordinary achievements speak for themselves via a spotless track record on the junior and professional circuits. With his striking metallic black and yellow paint scheme, Lewis will represent Great Britain at the World Grand Prix. He also carries the flag of Grenada, home to his family who emigrated to Britain in the 1950s. His unrivaled technical skills, natural speed ability, and cool, karate-inspired attitude make him a powerful contender too.

In the film, he first appears talking with Lightning McQueen and Jeff Gorvette when they arrive at the World Grand Prix opening ceremony in Tokyo, which he and Jeff meet McQueen. When they notice Mater talking to Zen Master, he was wondering who he was with. He then later appears with the other World Grand Prix racers when Mater is drinking from the fountain after having too much wasabi, which he thought was pistachio ice cream. He is then seen at the race, which he appears in all three.

Lewis was seen at the Porto Corsa race behind Jeff Gorvette. When the pileup of cars starts during the Italy race, Hamilton and Gorvette stop to avoid being hit and are the only racers to be able to do so, which he along with Jeff were the only cars who did not crash into Shu Todoroki, and a few of the racers who did not get hit by the Lemons' electro-magnetic pulse generator. He then races in London. When the race begins, he was seen in 4th position. Later in the London race, he was seen in 3rd position, behind Francesco. After that, he raced in Radiator Springs. In the race, he and Jeff were in each other's positions, which he talks with Jeff while lining up, and raced beside him.

Lewis is based on, named after and voiced by the real British Formula One driver Lewis Hamilton. Hamilton chose the car’s final black and yellow paint scheme for the car in the movie.[2][3]

Lewis is modeled after a McLaren MP4-12C GT3, although he has some slight differences, notably in the appearance of his rear lights.

Originally, Lewis was to be named Lewis Revington.[4] He had a grayish paint job with a ghost pattern of Union Jack, and wheel trims shaped after the Union Jack, exactly as the final design of Prince Wheeliam. It seems that the gray color was chosen after the colors of the McLaren racing team.[5] His racing emblem also displayed the England flag only.

Lewis Hamilton involved himself directly in the design of his character (and was the only voice actor to do so).[6] At his suggestion, the gray design was abandoned (before being apparently passed on to Prince Wheeliam) and was changed to the final yellow-striped black paint job, with different wheels.[7] Producer Denise Ream said: "He was very particular about what he wanted. His emblem combines the Union Jack and the flag of Grenada – which is on his actual helmet. He wanted the car to be black with yellow pinstriping, and he picked the wheels. We had a great time sending pictures back and forth and sharing notes."[8]

Lewis and Jeff braking before the crash in Porto Corsa.

Jeff and Lewis racing in the Radiator Springs Grand Prix.

Two of Lewis' pitties
Add a photo to this gallery 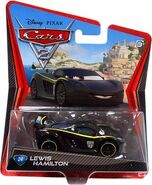 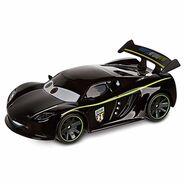 Lewis' Disney Store
Add a photo to this gallery

Retrieved from "https://pixar.fandom.com/wiki/Lewis_Hamilton_(Car)?oldid=207149"
Community content is available under CC-BY-SA unless otherwise noted.