"Hey! Hey! That's it! No one touches Little Mikey!"
—Mike, as he angrily takes his teddy bear away from Boo.

Little Mikey is Mike Wazowski's stuffed teddy bear which appears in Monsters, Inc. and Monsters University. Apparently, it is what is considered a bear in the Monster World.

In the film, it is seen on the shelf in Mike and Sulley's apartment. In its first appearance, Sulley was pushing a lot of things including the teddy bear during scaring practice with Mike. When Boo is in the house, Sulley gives it to her. In anger, Mike angrily takes it back, because he doesn't want her germs on it. This causes Boo to cry loudly, and almost gets them caught by the CDA. Sulley tries to give it back, but Boo won't stop crying. However, when she finally responds and cuddles the bear, she touches Sulley's hand which makes Sulley flinch, causing the bear to fly away from his hands. It isn't until Mike accidentally trips into the trash can, gets a shelf full of books stuck in his mouth, and is smashed by a speaker that Boo cheers up and starts laughing.

In the film's first teaser trailer, Mike's teddy bear can be seen next to him.

In the film itself, it makes a cameo on Mike's shelf in his apartment with Randall Boggs. Later on, he moves it, along with his other things, into his room with Sulley in the Oozma Kappa fraternity house. 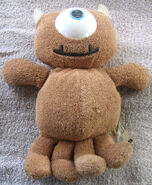 A real life version of the toy

Little Mikey next to Sulley's arm
Add a photo to this gallery
Retrieved from "https://pixar.fandom.com/wiki/Little_Mikey?oldid=188871"
Community content is available under CC-BY-SA unless otherwise noted.