Lord MacGuffin is a character in Brave. He is one of the three lords of King Fergus's kingdom, and the leader of Clan MacGuffin.

Strapping Lord MacGuffin is full of brawn and dignity. Though a man of few words, his deep voice resounds across the land demanding respect and contributing to his reputation as the most even-handed and reasonable lord in the kingdom. Even so, like his fellow lords, MacGuffin isn’t opposed to a first-rate brawl or full-throated belly laugh.[1] 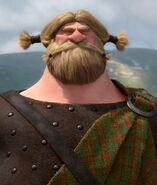