Luca is an American 3D computer animated film produced by Pixar. It was released on June 18, 2021. The film was directed by Enrico Casarosa and produced by Andrea Warren as Pixar's 24th feature film. The screenplay was written by Jesse Andrews and Mike Jones. It premiered on Disney+ with no extra charge instead of its original theatrical release date.[1] The score was done by Dan Romer.[2]

Luca Paguro, a timid young sea monster living off the coast of the Italian city Portorosso, herds goatfish and is forbidden by his parents to approach the surface, as humans might hunt him. One day, Luca meets Alberto Scorfano, a fellow sea monster child who lives alone above the surface, claiming that his father simply isn't around much. Alberto encourages Luca to adventure out of the ocean, showing him that sea monsters look exactly human when dry, but return to their true forms when wet. Luca follows Alberto to his hideout, where the boys connect while making and riding a makeshift, fragile Vespa. Upon discovering their son's actions, Luca's parents plan to send Luca to live in the deep sea with his uncle Ugo. In retaliation, Luca and Alberto run away to Portorosso to find a Vespa and travel the world.

The boys run afoul of Ercole Visconti, a local bully and repeat champion of the Portorosso Cup Race, but Giulia Marcovaldo, a young girl, helps them escape. In hopes of winning the money needed for a Vespa, the boys and Giulia form a team for the triathlon, which involves swimming, pasta-eating, and biking. Unable to swim without revealing themselves, Luca and Alberto respectively take on the biking and pasta-eating races, while Giulia takes the swimming race. Ercole vows to beat the group.

While the boys befriend Giulia's fisherman father Massimo, Luca's parents head to the surface to find their son. Giulia teaches Luca about school, and the two bond over a love of learning, especially about astronomy. Alberto becomes jealous of Luca and Giulia's growing friendship. When Luca starts ignoring Alberto's advice, and tries changing their plans to going to school instead of traveling, he and Alberto fight. In anger, Alberto deliberately reveals his true form to Giulia. Luca feigns surprise at the transformation, and a heartbroken Alberto is driven off by Ercole. Giulia later deliberately splashes water on Luca and sees his true identity; she sends him away for his own good.

Luca attempts to reconcile with Alberto, and discovers that Alberto's father deliberately abandoned him long ago, making Alberto think he was a bad kid who should not have friends. Luca sets out to win the Vespa on his own, to make things right. After several mishaps, Luca takes the lead in the bicycle race, but is forced to take shelter when it starts to rain. Alberto arrives with an umbrella, but Ercole knocks it away and both boys are revealed as sea monsters. They flee Ercole, who now intends to harpoon them; Giulia helps by smashing her bike into Ercole's, but she is injured. Luca and Alberto turn back to help her, and are defended from monster hunters by Massimo, who reveals that the boys are his friends. He also points out they have crossed the finish line and won the race. Other disguised sea monsters reveal themselves, including Luca's family, and the townsfolk happily welcome them. Meanwhile, Ercole is humiliated by his henchmen, who were fed up with his abuse.

Luca and Alberto purchase a Vespa, but the latter sells it to buy a train ticket for Luca, allowing him to go to school in Genoa with Giulia. Luca's family, Massimo, and Alberto see Luca and Giulia off at the train station, where they all promise to stay in touch. During the credits, Luca meets Giulia's mother and attends school, while showing off his sea monster appearance. Massimo becomes Alberto's father figure, and Alberto and Luca's family enjoy interacting with the humans in Portorosso. In a post-credits scene, Ugo talks to a stray goatfish about how great his life is in the depths of the ocean.

First Teaser, when the film was announced

The Luca header on the Upcoming page on Pixar's official website. 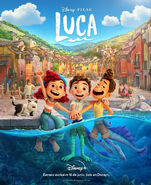