Luxo, Jr.
Light and Heavy
Surprise
Up and Down
Front and Back
Every Pixar production logo starting with Toy Story
Luxo, Jr. is Pixar's mascot and the star of the 1986 short film of the same name. He is a small, light gray desk lamp (although he has sometimes looked more white than light gray) who loves to play with bouncy balls.

After having the same light bulb for over 20 years, WALL•E had to replace it for it when it went out, which can be seen in the trailer for WALL•E, replacing the standard bulb with a compact fluorescent. Luxo, Jr. has been seen in every Pixar feature film and short film since Toy Story, during the film's introduction and at the end of the credits as the I of the Pixar logo.

Luxo, Jr.'s most recent (temporary) upgrade was that of a laser for the teaser, and regular trailers of Cars 2.

Luxo Jr. in the Pixar logo

Luxo Jr. shoots a laser out of his light in the Cars 2 logo premier.

A giant statue of Luxo Jr. at Pixar Studios

Luxo Jr. as the title character in the short Luxo, Jr.

Luxo Jr. in Front and Back

Luxo Jr. in Light and Heavy

Luxo Jr. in Up and Down

There is a picture of Luxo Jr. in the background in Tin Toy.

Luxo, Jr.'s appearance as a constellation in Outer Space in Toy Story 2. 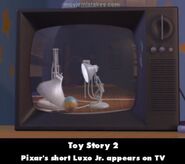 Luxo, Jr.'s another appearance on TV in Toy Story 2.

Luxo Sr. appears above the Pixar Studios in the credits of Cars 2.

One of the Luxo Jr. Short Series also appears on an advertisement for "Air Luxo" in the credits of Cars 2.