Mack is a main character in Cars and Cars 3, and a supporting character in Cars 2. He is a red 1985 Mack semi-hauler. He is a loyal truck and Lightning McQueen's only true friend (before going to Radiator Springs). He is responsible for transporting Lightning around from race to race in a luxury container crammed full of gadgets and trophies.

Driving incredibly hard, often right through the night, Mack is a truck who never stops. He's also there to remind Lightning of his contractual obligations to sponsors Rust-eze and to keep an eye on things. Despite all his efforts, Mack never gets any kudos.

"Endless days on the road and sleepless nights criss-crossing the country... For some this life would quickly grow old. But not Mack. No sir. Mack knows how important his role is. He's driving Lightning McQueen, the world's fastest racecar. He's part of a team, and everybody knows there's no I in team, just like there's no I in Mack."[1]

Mack is responsible for transporting Lightning McQueen to all his races. After McQueen pushes him to drive all night to California, Mack falls asleep and ends up losing McQueen. He is seen on television as he arrives in California and discovers that McQueen is missing.

Eventually, the media gets a tip that McQueen was in Radiator Springs. Elated to see his boss, he apologized for losing him. He then detached from the trailer to shield McQueen from the press so he could talk with Harv on the phone and so he could say his goodbyes to Sally. Soon enough, he urged McQueen to get into the trailer otherwise Harv would have him fired.

At the final race, he was to act as McQueen's pit crew before the Radiator Springs folks came. When McQueen chose to let Chick Hicks win the race to help an injured Strip Weathers across the finish line, Mack congratulates him. During the credits, he watches parodies of other Pixar movies and notes that all of them feature a character played by John Ratzenberger, and amusingly, he is voiced by Ratzenberger as well. he then begins criticizing all of the parodies due to hearing all of them using the same voice actor.

"Mack is Lightning McQueen's trusted long-haul driver, crisscrossing the country from race to race, always with a smile on his grill. After dropping McQueen off in Radiator Springs with his fourth Piston Cup championship trophy, Mack sets off with the rest of the pit crew for a well-deserved vacation. Who knew that McQueen would end up jetting off to a race around the globe in the World Grand Prix?"[2]

Mack makes a couple minor appearances as part of McQueen's Piston Cup racing team. He also has some slight differences in his design in this film, possibly to take on McQueen's own redesign: while in the original film his cap-shaped wind deflector is white, here it is red. The design of his trailer is also different.

In the film, he is briefly seen at the beginning when McQueen comes back to Radiator Springs, where he says one of his only two lines, "Oh, these best friend greetings are getting longer every year." He doesn't accompany him to the World Grand Prix due to being on vacation. At the end he talks with Lizzie and says the other of his only two lines of the movie, "Oh, those two are perfect for each other."

"If there is one vehicle that has been with McQueen since nearly the very beginning, it's Mack. Although he's technically a race transporter, Mack is so much more than just a part of Team McQueen. Mack is McQueen's confidant, his good friend, and his sounding board. He's always there, and always ready to roll, whether it's to get McQueen to the demolition derby or transporting him all the way to the Florida 500."[3]

Mack continues to transport McQueen to his races. When McQueen is asked by Dusty and Rusty Rust-eze to go to the new Rust-eze Racing Center, Mack takes McQueen, Luigi, and Guido there.

Later, with McQueen disguised as Chester Whipplefilter and Mack disguised as a Jocko Flocko Supplies truck, he takes both McQueen and Cruz Ramirez to Thunder Hollow. However, after McQueen's identity is exposed, Mack transports them out of Thunder Hollow before Cruz orders him to pull over after McQueen yells at her for what happened. Later, Mack takes McQueen to Cruz so he can apologize to her and ask her to come to Thomasville with him. Eventually, he takes McQueen and Cruz to Florida for the final race of the Piston Cup season on the Florida 500 stadium.

In a few photos during the credits, you see that Mack becomes Cruz's transporter for her races after McQueen becomes her crew chief as the "Fabulous Lightning McQueen".

"What? Did I forget to wipe my mud flaps?"
—Mack, after everyone gasps when they find out Lightning is missing.

Lizzie: "A valuable dent? She's as crazy as Mater!"
Mack: "Oh, those 2 are perfect for each other."
—Lizzie and Mack, hearing that Holley Shiftwell wants to keep her dent.

Mack in The World of Cars Online

Mack helping McQueen by being his pit crew.

A reveal of Mack's look in Cars 3 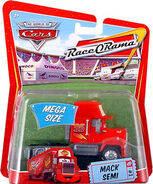 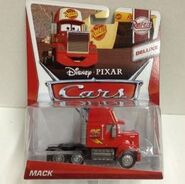