The Magic 8-Ball is a classic toy by Tyco, seen the first three Toy Story movies.

"Will Andy pick me? ... DON'T COUNT ON IT?! OHHHHHHH!"
—Woody's question to the Magic 8-Ball and his reaction to its reply

In Toy Story, the Magic 8-Ball is seen on Andy's desk. Upon hearing the news that Andy can only take one toy with him to Pizza Planet, Woody is afraid that Buzz will be taken instead of him. In hopes of reassurance, he tries to use the ball to predict whether or not Andy will take him instead, but to his dismay, the ball's reply is: "Don't count on it," and Woody throws it away out of anger and frustration. The ball rolls and falls behind the chest of drawers that Woody is sitting on, inspiring him to (out of cruelty and jealousy) try to do the same thing to Buzz to guarantee success at being taken out. However, Woody's plan backfires, and Buzz is instead knocked out of the window and into Andy's front garden, which angers the other toys and space ranger.

In Toy Story 2, when Woody gets shelved, the Magic 8-Ball is seen residing on the shelf next to him covered with dust.

In Toy Story 3, the Magic 8-Ball is seen in its original spot on Andy's desk during the home videos of Andy playing as a child.

Back in the present time, Molly is seen carrying a large box of toys to be donated to Sunnyside, and the Magic 8-Ball falls out. Andy then puts it back and helps her carry it, despite her not wanting any help (Andy must've given it to her over the years). 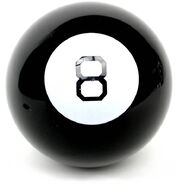 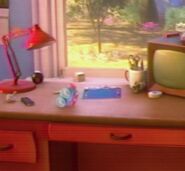 One of its appearances in Toy Story 3.
Community content is available under CC-BY-SA unless otherwise noted.
Advertisement