Cars 2
Mama Topolino is a character in Cars 2.

To all who know her, Luigi’s aunt, Mama Topolino, is a masterful cook with the best fuel in the village of Carsoli, near Porto Corsa, Italy. Though she has a loving, but fiery relationship with her husband, Uncle Topolino, she shows her love and generosity for both family and friends by feeding everyone her renowned delizioso fuel.[1] 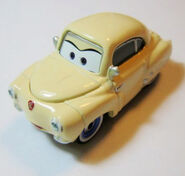 Mama Topolino (prototype die-cast)
Add a photo to this gallery

Retrieved from "https://pixar.fandom.com/wiki/Mama_Topolino?oldid=148139"
Community content is available under CC-BY-SA unless otherwise noted.