Marine Life Institute (shortened to MLI) is a major location in Finding Dory. It is a rehabilitation center for marine species. It also incorporates exhibits for educational purposes, such as several aquariums. As such, it works for the conservation of marine life. It is known to house several different types of animals, such as Hank, Bailey and Destiny, and previously Dory and her parents. 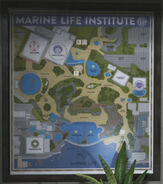 A map of the Marine Life Institute

Retrieved from "https://pixar.fandom.com/wiki/Marine_Life_Institute?oldid=183937"
Community content is available under CC-BY-SA unless otherwise noted.