Marty Brakeburst is a minor character in Cars. He is a Remirunabout Neuro. He always worries about the slightest thing that's gonna happen.

"Marty doesn't feel alive unless he's got something to worry about. Whether it's his receding tire treads, politics, the teenagers next door, fossil fuel running out one day, or the general state of the world, Marty is only truly happy when he's miserable."[1]

He watches in shock at the huge crash caused by Chick Hicks in the Motor Speedway of the South alongside a brown car. 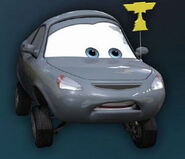