Lightning McQueen's tires are flat, so he asks Flo for some air. Then, Mater jumps in and says that he thought he already solved that mystery. Then, he starts his story.

Mater was a private investigator solving mysteries. It was 7:15 on a Friday night, Mater was in his room reading different newspapers about counterfeit tires. Tia comes in the room and Mater asks what she wants. Tia says that her sister, Mia, has been carnapped. Tia says that she last saw Mia working for Big D at his night club, the Carbacabana. Mater goes to the night club and asks a singer named Carmen if she's seen Mia anywhere. Carmen says that she saw her a few days ago with Big D and that she smelled salty, like the ocean. Then, one of Big D's henchmen, Clyde, kicks Mater out and breaks one of his headlights for being nosy. Mater then goes to a garbage truck named Stinky and asks him what the "dirt" on the street is. He says he doesn't know, that he's just throwing out lots of flat tires. He says, "It's odd though." because they all smell salty and that he hasn't smelled anything like that ever since he was working at the docks. Then, Mater takes off to the docks. After trying to sneak in by wearing boxes over himself, Big D's henchmen see him and dangle him over the ocean waters. Tia shows up, begging them not to hurt him. Mater now finds out that Tia double-crossed him. Tia claims that she only did it because it was the only way to save her sister. But just before they're going to throw him in the ocean, Lieutenant Lightning McQueen and other police cars arrive. Tia then sets Mater free and he stops Big D by throwing a box on top of him. The box breaks, revealing counterfeit tires. The police then take Big D away to jail.

Back in Radiator Springs, Lightning then says that that's the most ridiculous thing he's ever heard. But before either of them can say anything, Carmen shows up telling everybody to Conga. And Mater then dances away with them.

Mia and Tia being "carnapped" by Big D.

Carmen The Carbacabana Girl and the Mariachi Pitties.

Mater being held by Crane.

Ship at the docks. 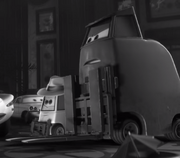