Mater the Greater is the second episode in the Cars Toons series.

At Flo's V8 Cafe, Lightning McQueen, Flo, and other townsfolk from Radiator Springs are settling down to a sip of oil when Mater does a jump and hits some cans. Mater tells Lightning how he used to be a daredevil, akin to Evel Knievel.

The film then goes to a dirt stadium, which is set up complete with the Lightyear Blimp hovering over the stadium. Mater the Greater enters the stadium and gets ready for his first stunt, jumping a long line of cars. Mia and Tia are also there and look a lot like Mater complete with fake buckteeth. Buck the Tooth Vendor (made to look like Brian) sells two buckteeth for 1 buck. Mater then gets ready to jump. He backs up so much, he hits the wall behind him. Then, he zooms toward the ramp. But just before he's about to jump, he lands on the first car and drives across them and at the end, jumps over the other ramp. Mater does a whole bunch of stunts: is shot from a cannon through a ring of fire (his hook catches on the ring and burns him), flies on a biplane (Props McGee) that spins around (his hook catches on the plane so he doesn't fall off), and jumps from a high height into a pool of water. But the biggest stunt Mater ever does is jumping Carburetor Canyon.

At Radiator Springs, Lightning doesn't believe that last stunt, but Mater reminds him that "[he] was there, too".

Back in Radiator Springs, Lightning asks what happened. Mater tells Lightning that he didn't make it and drives away with Mater the Greater's pitties, Lug and Nutty, following him.

Mater Fans: Mia and Tia
Add a photo to this gallery

Props McGee
Add a photo to this gallery 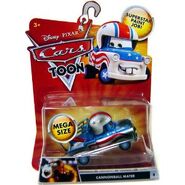 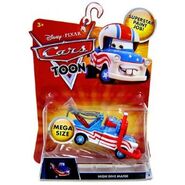 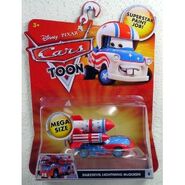 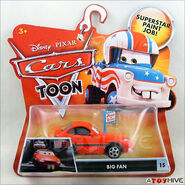 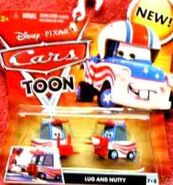 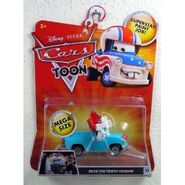 Lug & Nutty with Oil Cans
Add a photo to this gallery
Retrieved from "https://pixar.fandom.com/wiki/Mater_the_Greater?oldid=215419"
Community content is available under CC-BY-SA unless otherwise noted.