"Merida, our central character, she's a fiery, spirited lass, and her hair is very much part of her character and who she is."
—Brave producer Katherine Sarafian[1]

Princess Merida is the protagonist in the film Brave. She has three brothers Harris, Hubert and Hamish. Her parents are King Fergus and Queen Elinor. She is also the first female protagonist in a Pixar film.

Passionate, beautiful and fiery, Merida is a headstrong teenager of royal upbringing who is struggling to take control of her own destiny. She feels most at home in the outdoors honing her impressive athletic skills as an archer and swordfighter, and racing across the magnificent Highland countryside with her faithful horse, Angus. With a spirit as vibrant as her untamed hair, Merida also has a softness of heart, especially when it comes to her wee triplet brothers. As the daughter of the King and Queen, her life is weighted with responsibilities and expectations, causing her to yearn to preserve her freedom and independence. When Merida blatantly defies an ancient tradition, the consequences of her actions prove disastrous for the kingdom. She must race against time to make right the result of her reckless behavior, her journey compelling her to look inside to discover the meaning of bravery and reveal her true fate.[2] 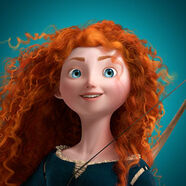 Merida on a promotional poster for Brave.

Merida waits in the Circle of Stones with her bow and arrows ready.

Merida enjoying dinner with her family.

Merida aiming her arrow at Mor'du.

Merida encountering a Wisp just outside the Circle of Stones.

Merida stops the tribes' fighting the same way her mother did.

A young Princess Merida with her father's bow

Merida represents Clan DunBroch in the competition for her own hand.

Merida walks briskly through the crowd of people gathered in the castle.

Merida engages in a swordfight.

Merida and Angus walk through the Circle of Stones.

Merida rides Angus back to the castle.

Climbs a cliff to reach the Flaming Waters.

Merida tells a story to the Royal Triplets at dinner.

Merida finds herself in a dark castle room somewhat similar to hers.

Merida practices talking to her mother while she cares for Angus.

Merida in the Circle of Stones.

Merida and her mother, now a bear, approach the entrance to the Prince's castle.

Merida sobs into Angus's mane as she rides off.

Mor'du reaches for Merida as she jumps to reach her mother's paw.

Concept art of Merida aiming her arrow while on Angus's back. 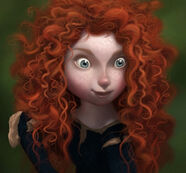 Concept art of Merida readying her bow and arrow.

Concept art of Merida in her extremely tight dress. 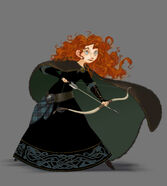 Merida as a Disney Princess 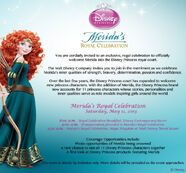 Retrieved from "https://pixar.fandom.com/wiki/Merida?oldid=129572"
Community content is available under CC-BY-SA unless otherwise noted.