Jan Rabson
Mr. Microphone, Microphone, Mr. Mike, or Mike is a microphone and tape recorder toy made by Playskool, appearing in Toy Story and Toy Story 2. His additional feature is an AM/FM radio tuner. He is a minor supporting character and one of Andy's many toys. Mike was based on the real life toy manufactured by Playskool in 1991, known as "Playskool Rockin' Robot." A real-life Mike was made in response to his appearance in Toy Story. Mike is a toy tape recorder with a microphone made by Playskool. Speaking into the microphone will amplify one's voice. Mike is a multi-talented toy as he is not only a microphone and tape recorder, but he also is a tape player and has a built-in radio. It is unknown if Mike can talk. If so, he has never had a speaking role. Mike's name is derived from mic, the abbreviated form of the word microphone. Much like Mr. Spell and Etch, Mike gets around by waddling. It is unconfirmed where Mike lives in Andy's bedroom, but it is assumed that he lives in Andy's toy box or inside the closet. It is even possible that he may live under Molly's crib. He was obtained by Andy sometime prior to Toy Story. He appeared in Toy Story and Toy Story 2. He doesn't appear in Toy Story 3 and Toy Story 4..

In Toy Story, Mike is first seen when all the toys are coming out into the open bedroom after Woody signals that the coast is clear. He is then shown helping Woody give the staff meeting before Andy's birthday party by providing his microphone to help amplify Woody's voice. He seemed to be shocked that Andy's party was moved to that day, even though Andy's birthday was not until the following week. This frustrated Woody in that every Christmas and birthday event, they go through the same situation of anxiety.

When Hamm alerts the toys that the birthday guests have arrived, Mike, along with basically every other toy, except Woody, run to the window to see what kind of sized presents his friends are bringing, in fear that Andy may get bigger toys and that they will all be sold or thrown away.

Upon Buzz's arrival, Mike along with all the other toys take a immediate liking towards him. One night, when Woody accidentally knocked Buzz out the window, many of the toys accuse him of doing it on purpose to get rid of him. It is possible that Mike was one of the few toys that did not accuse him of doing it intentionally. Soon after this, Mike was packed away in the moving boxes with the rest of Andy's toys and didn't appear again until the end of the film.

Unlike most of the toys, Mike does not appear when the toys proceed in throwing Woody out of the moving van. It is possible that he was there, but to the audience's eye, he is nowhere to be seen. Mike appears again in Andy's bedroom at the Christmas present meeting, appearing alongside See 'n Say and Mr. Potato Head before hearing what presents Andy receives for Christmas.

In Toy Story 2, Mike has a much smaller role than in the first film and only appears in some background scenes.

He first appears helping the toys look for Woody's hat before he had to leave for Cowboy Camp. When Buster hunts for Woody in Andy's room, Mike is seen getting knocked over by Buster while on the run searching for Woody. When the Davis' have their yard sale, Mike, along with the rest toys panic in fear that they will be sold.

When Wheezy is stranded out at the yard sale, Woody and Buster go to his rescue and free him. When Woody is thrown off Buster, Al McWhiggin finds him and steals Woody from Andy. Mike attends the detective session on identifying Woody’s kidnapper and is very shocked upon discovering that it was Al from Al’s Toy Barn, as no one knew who it was at the time of the theft.

At the end of the film, the toys reunite and Wheezy uses Mike as a karaoke machine and sings "You've Got a Friend in Me" with his microphone.

Mr. Mike was one of the only toys not seen in the series of home videos. He was most likley either donated, handed down to Molly, or thrown away sometime shortly after the events of Toy Story 2. 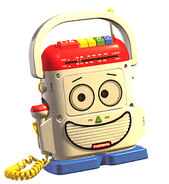 One of the real life Mikes by Playskool.
Add a photo to this gallery 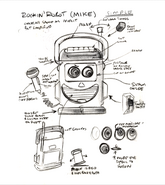 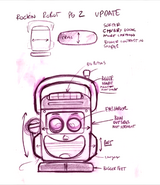 Add a photo to this gallery
Retrieved from "https://pixar.fandom.com/wiki/Mike_(Toy_Story)?oldid=228223"
Community content is available under CC-BY-SA unless otherwise noted.