"Would you listen to this? Blame it on the little guy, how original. He must've read the schedule wrong with his one eye!"
—Mike, in the teaser trailer

Michael "Mike" Wazowski is the deuteragonist of Monsters, Inc. and the protagonist of its prequel Monsters University. He is a lime green spherical monster with one large green eye, two small horns on his head, and thin arms and legs attached to either side of his torso.

In the first film, Mike is Sulley's best friend and working partner at Monsters, Inc.. He supports Sulley about being the number one scarer, and both are enemies of Randall Boggs. He is also Celia Mae's boyfriend and seems to be watched at by Roz who awaits for his paperwork. While at Harryhausen's for Celia's birthday, Sulley appeared out of nowhere to tell Mike that he had lead a human girl into the monster world. Putting her into a Monsters, Inc. gym bag, Sulley tried to show him, but the human girl got out of the bag and wreaked havoc all over the restaurant. The two secretly took her out before the CDA found her and disinfected the entire restaurant.

When Mr. Waternoose throws Sulley and Mike into the frozen wasteland, a rift forms between them after Mike gets mad at him for listening to Waternoose instead of him.

When they learn that Randall and Waternoose are in on a scam of draining children of screams, Sulley tricks Mr. Waternoose into confessing Randall's plan and him working as Randall's henchman while Mike records the confession and smugly replays it to watching CDA agents. Immediately, the CDA turn on Mr. Waternoose and arrest him for being in cahoots with Randall. Once Boo is back in her room, Mike rebuilds her door that the CDA destroyed so Sulley will be happy again.

Sometime after the film, Mike's low-budget company play "Put That Thing Back Where It Came From or So Help Me" that he has starred in, written, directed, and produced comes in front of the audiences.

Mike Wazowski is first seen as an elementary student attending Ms. Graves' class visiting Monsters, Inc. as part of a field trip. During the field trip, Mike tries to get a look at the scare floor but the other students push him aside, telling him he doesn't belong there. Mike walks past the safety line and follows a scarer named Frightening Frank McCay into the Human World. Mike watches Frank scare a child then follows him back through the door. Frank is not only surprised but impressed with Mike for sneaking in unnoticed, giving him his Monsters University cap. This incident spurs Mike to become a scarer and attend MU.

On the first day at college, a now 17-year-old Mike's roommate is revealed to be Randall Boggs (his and Sulley's eventual archenemy) who is friendly towards Mike. When he sees Randall's invisibility at work, Mike encourages him to use it more, telling him to lose his glasses which don't turn invisible. While attending Scaring 101 at Professor Knight's class Mike sees gets his first look at Sulley (Mike's eventual friend), who, despite his natural talent, is lazy and arrogant. Dean Hardscrabble, the school's headmistress and a famous Scarer then flies into Prof. Knight's classroom and tells all of the students that they all had to complete a final exam at the end of the semester which will determine if they stay in the program. Mike immediately commits to studying hard. Sulley then comes in through the window having stolen Archie the Scare Pig (rival school Fear Tech's mascot). Archie steals Mike's hat and runs off. Mike catches him but Sulley gets the credit for it, impressing the Roar Omega Roar president Johnny Worthington III and sparking a rivalry between Mike and Sulley. Finally, the two monsters get into an argument and they accidentally knock over Hardscrabble's scare can. Though she is calm about it, she uses the incident to fail Mike, telling him he's not scary. Sulley is also washed out of the program due to his recklessness.

Mike decides to participate in the university's Scare Games by teaming up with a fraternity made up of rejected monsters called Oozma Kappa composing of Don Carlton, Terri and Terry, Art, and Squishy. Sensing an opportunity, Mike baits Hardscrabble into accepting a wager: if OK wins, she allows the fraternity into the Scare Program; but if they lose, Mike has to leave MU. Sulley joins the team, which Mike has to accept since they need six 'bodies' and Randall has joined ROR, abandoning Mike. OK only makes it through the Toxicity Challenge because Jaws Theta Chi was disqualified. Mike then takes charge of the team and instructs them to do as he does. For the next challenge, they have to get through the library without getting the librarian's attention, retrieve their flag, and escape. Sulley's impatience nearly costs them, but Squishy somehow got the flag in the commotion, advancing to the next round. That same night, they are invited to the ROR house for a party, but get badly humiliated. OK is ready to call it quits, so Mike takes them to Monsters Inc, showing them that they can still become Scarers, if they use their differences to their advantage. This also sparks a change in both Sulley and Mike, and they begin to respect each other.

OK trains even harder under Mike's new leadership skills, making it through the next two rounds using their actual talent. OK is pitted against ROR for the final round, in which both teams try to out-scare the other using simulators set to their highest level. On Sulley's suggestion, Mike goes last, pitting him against Johnny. In the simulator, Mike remembers all the scorn and derision towards him in his life, unleashing his frustration in one mighty scare, and with that OK wins the Scare Games to everyone's surprise. Mike later discovers that the simulator was rigged so that Mike would get the highest score. Sulley admits it was him, revealing his lack of confidence in his friend. Mike decides to go into the human world where he tries to scare a little girl but he finds himself in a summer camp, who teams up with her bunkmates. The other kids don't find him scary, forcing him to run. Minutes later, Sulley arrives to rescue Mike and has to escape from forest rangers who mistake him for a bear. He finds Mike at a lake, sulking over his failure. The two argue, the both of them venting their frustrations. They eventually patch things up with each other and make their way back to the door, but Hardscrabble deactivates it. With the rangers nearby, Mike believes that they can generate enough energy to activate the door from the human world. Using Mike's knowledge of scare tactics, Sulley scares the adults, which not only activates the door but overloads every scream canister in the room, as well as the door itself. Mike and Sulley make it back, but are expelled for their actions.

Sulley points out an ad in the paper from Monsters Inc, giving them a chance to work at a Scare company. They start in the mailroom, then get promoted to janitors, kitchen assistants, and then can wranglers. Finally, Sulley enters the company's open tryouts, becoming a scarer with Mike as his assistant. He and Sulley became rookie of the year.

In the short film Party Central Mike shows up at Oozma Kaapa's party when Sully and Mike decides to visit them. Mike then uses a borrowed door to get monsters from the Roar Omega Roar party to show up at the party at Oozma Kaapa . When the party is over, Mike is last seen leaving the house. 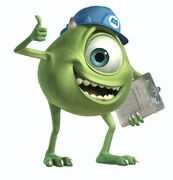 Younger Mike from Monsters University as compared to his older self in Monsters, Inc. 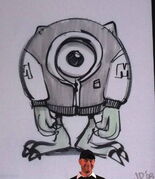 One incarnation the production team thought of for young Mike.

Comparison of eyes and horns between Monsters, Inc. and Monsters University

Mike showing off his retainer 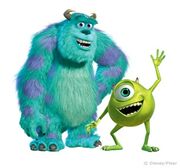 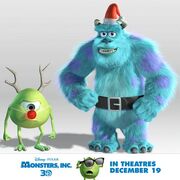 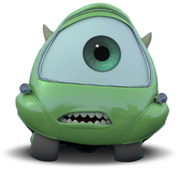 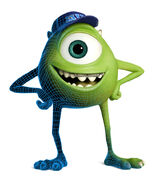 Retrieved from "https://pixar.fandom.com/wiki/Mike_Wazowski?oldid=202623"
Community content is available under CC-BY-SA unless otherwise noted.