"Come on, Molly. Oh, you're getting heavy."
—Andy as he lifts Molly out of her crib

She is seen as a baby who doesn't have a major part and could only be seen in a few scenes, and is also seen roughing up Mr. Potato Head during Andy's playtime. She is then seen listening to "Hakuna Matata" (from Disney's The Lion King) and giggles when she sees the toys outside her mirror. She is last seen opening a present which is a Mrs. Potato Head, which is later owned by Andy.

Ms. Davis: "Oh, you are such a big girl. Andy, you think she's ready to drive the car yet?"
Andy: "Yeah, and I can teach her."
―Andy and his mother as they observe Molly walking

She is absent for the whole film apart from when Andy's mom and the end where she is finally improving her walking. She is mentioned by Bo Peep when searching for Woody's hat in Molly's room and later in the film when Woody tells Jessie, Andy has a little sister.

Ms. Davis: "Molly, you’re not off the hook either! You have more toys than you know what to do with. Some of 'em could make other kids really happy."
Molly: "What kids?"
Ms. Davis: "The children at the day care. They’re always asking for donations."
Molly: "But, Mom..."
Ms. Davis: "No buts. You choose the toys you want to donate. I’ll drop them off at Sunnyside."
―Molly being told by her mother to do something with her toys

In Toy Story 3, Molly is first seen as a baby during the old home videos Ms. Davis took when Andy was young. Many years later, she appears as a 12-year-old. She is first seen in Andy's room laughing on why Andy still has his old toys but is lectured by Andy and their mother. She then donates a whole bunch of things including Barbie, and listens to music while reading a Tween magazine. She is last seen at the end of the film, where she asks if Andy is going to say goodbye to Buster.

Although not a physical appearance, she appears in a photo with Andy and their mother where Andy has graduated from high school.

Molly makes a brief appearance in the flashback opening scene set in the years between the second and third films. She is presumably aged between 6-10 at this point, as she is seen walking out of her room. Her voice is also heard when her mother donates Bo Peep to a man, stating that she doesn't want her Bo Peep lamp anymore.

In the first film, Andy shares his room with Molly and doesn't seem to have a problem with it. In the second film, they have separate rooms, but as seen in the clips at the start of the third film, Andy still doesn't mind Molly being in his room. He is seen at the end of the second film helping his sister walk to their mother and comments that he can teach her to drive. However, by the present time in the third film, Andy, having developed a more adult -like personality, is much less willing to let Molly be in his room and doesn't allow her to touch his things, but still loves her. He helps her with a box full of toys she chose to donate to Sunnyside, and asks her if she will miss him. She then asks her brother if she can still have his room if she says "no", believing it will be hers when he leaves. When Andy says "nope", Molly replies that she will miss him. Near the end of the film, Andy mentions that he and Molly "said goodbye like 10 times", suggesting they are close.

Molly with her mother in Toy Story.

Molly improving on her walking in Toy Story 2. 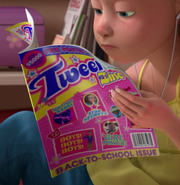 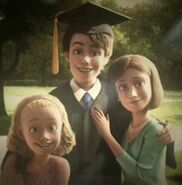 Molly Andy and their mom on Andy's Graduation. 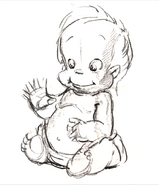 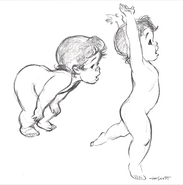 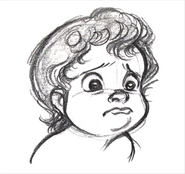