Here are all the unnamed monsters that appear in the films Monsters, Inc. and Monsters University:

These are various monster body parts seen in the opening credits that collect letters to form the title. One of them appears to be a large, green serpentine monster who chases down a fugitive "M" before capturing it to complete the title, and then slapping it with its tail to change its font.

A tiny monster couple living underneath Mike and Sulley's apartment composing of a light green winged monster husband and a pinkish-red monster wife. As the husband flies off to work, the wife tells him, "Have a good day, sweetie!"

A trio of monster kids who are playing jump rope with one's tongue in front of the eyeball's house. The kids are a green "Picasso-face", a blue Nancy Kim-lookalike, and an orange Ricky Plesuski-lookalike (whose tongue is used as the rope).

A giant eyeball who looks out a window overlooking the above jump-roping monster kids, who ends up being hit in the eye by one of said kids after he is accidentally flung into their window, causing him to get angry and yell at them.

A giant green monster who sweeps up garbage on the sidewalk and eats them once he's done.

A red monster with spikes on his back and a horn on his nose who accidentally sneezes on the newspaper he's reading, causing it to burn up, much to his dismay.

A purple gelatin monster wearing a fedora who accidentally gets his body sucked into a grate after treading on it, leaving only his hat, eyes, and mouth intact, again much to his dismay.

These are just generic monsters who work at the Monsters, Inc. factory. It is unknown if any of them are scarers, or at least to Scare Floor F.

These are monsters who are scarer assistants to the scarers. They often tend to wear blue hard hats on their heads.

A pink six-armed toad-like monster who has a sapient tongue resembling a light blue slug who eats his food for him.

A yellow monster resembling Lanky Schmidt who serves as the news anchor on various TV monitors.

Monsters that were witnesses of the child sighting (Boo) at Harryhausen's. They include a yellow Chalooby-lookalike and a green many-eyestalk monster with 20 eyes.

These young monsters are Ms. Nesbit's students the teacher brought to the factory as part of a field trip. They include Baby Smitty, a green "Picasso-face", a light green Bile-lookalike, and an orange Charlie-lookalike.

Little is known about these monsters aside from the fact that they are all students attending Monsters University.

Some of the students include:

These are monsters who act as security guards to Monsters, Inc. They chase down Oozma Kappa one night when they sneak into the factory grounds (Art was once said to have been sent to jail for an unknown crime), only for them to all escape in Ms. Squibbles' minivan. Several different security guards arrive during the climax along with the CDA when Mike Wazowski is unexpectedly trapped in the human world and Sulley trying to save him where they are distracted by the rest of Oozma Kappa when Dean Hardscrabble depowers the door only for Mike and Sulley to repower it by scaring some adult police officers while in the human world. 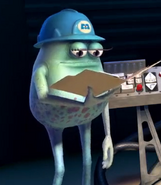 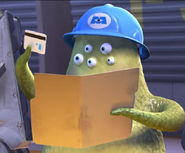 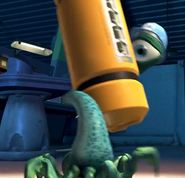 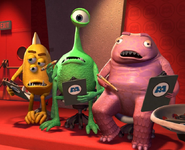 The kids playing, as well as the giant eyeball. 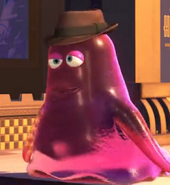