Monsters at Work[1] is an animated television series based on Monsters, Inc.. The series was first announced on November 9, 2017 and was originally set to be released on Disney+ on July 2, 2021 until a small delay pushed the release back to July 7, 2021.[2]

Taking place six months after the main events of and before the epilogue of the original film, the power plant is now harvesting the laughter of children to fuel the city of Monstropolis. Tylor Tuskmon is an eager and talented mechanic on the Monsters, Inc. Facilities Team who dreams of working on the Laugh Floor alongside Mike and Sulley.[1] 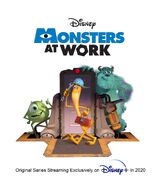 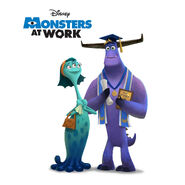 Celia In the Monsters At Work Teaser Trailer