Moon Mater is the eighth episode in the Cars Toons series.

One night, Mater and Lightning McQueen drive around and see the moon. They both stare at it in awe, and Mater claims to have been up there. Then, he starts his story.

It all started when Mater was towing a car to Florida and suddenly, "Houston" had a problem. Autonaut Impala XIII is stuck on the moon and he needs a tow. No one is certain where to get a tow until Mater shows up at the launch pad still towing the car. And with a little bit of training at "NASCA," he became an official Auto-naut. Now inside a space shuttle named Roger, Mater blasts off into outer space headed for the moon. Now landing on the moon, Mater spots Impala XIII. Mater connects his hook to the front of Impala XIII and blasts off back to Earth at 17,000 mph, with Impala XIII hanging on to him. Mater then says that 17,000 mph is nothing compared to Lightning, who shows up going at an even faster speed. Lightning, now even slightly lighting on fire, lands by shooting into the ocean, which then Mater does a safer way by using a very big raft and parachute. Now having returned to Earth, Mater and Lightning are celebrated with parades, interviews, and even Moon Mater Day!

Back in Radiator Springs, Lightning tells Mater, "That did not happen." "Well, suit yourself," replies Mater. Just then, Roger shows up and tells Mater that "Houston" has another problem. So, Mater drives inside Roger and they blast off into outer space for another mission.

Mater, getting ready to launch

The Pitties prepare for Mater's launch

Moon Mater with Mia and Tia

McQueen lands in the ocean
Add a photo to this gallery

Roger, a space shuttle Mater rides to the moon

TV show host
Add a photo to this gallery 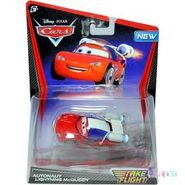 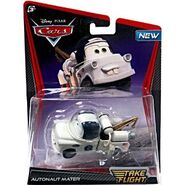 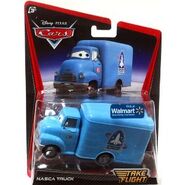 Burnt Autonaut Lightning McQueen
Add a photo to this gallery
Retrieved from "https://pixar.fandom.com/wiki/Moon_Mater?oldid=211148"
Community content is available under CC-BY-SA unless otherwise noted.