Mr. Pricklepants is a thespian hedgehog in lederhosen who says that he's "trying to stay in character," even when Woody tried inquiring as to his whereabouts. As Bonnie began playtime with her toys, she spits a jellybean onto Mr. Pricklepants in response to one of Woody's automated voices mentioning poison. Once Bonnie went to sleep, her toys helped Woody chart a path to Andy's house. But when he mentions passing a message to his fellow toys at Sunnyside Daycare, Bonnie's toys become alarmed and ask how he escaped. Mr. Pricklepants describes Sunnyside as "a place of ruin and despair, ruled by an evil bear who smells of strawberries." He points out Chuckles to testify. Despite their warnings that it's too dangerous to return to Sunnyside, Woody went anyway and rescued his friends. The next day, Woody returns to Bonnie's house with his friends, having been donated by Andy. When Andy leaves, Mr. Pricklepants is seen talking with Hamm.

In the end credits, he plays Romeo, alongside an Alien who is playing Juliet.

Mr. Pricklepants is first seen numbering the Aliens 1, 2 and 3 for a upcoming play that he is planning for his vacation plans. He can be seen portraying the humuhumunukunukuapua'a when Mrs. Potato Head shows Barbie and Ken the state bird and fish. He later serves as a waiter when Barbie and Ken are having their "dinner."

He also appeared in Partysaurus Rex, although he didn't speak.

He is one of the toys that Bonnie brings on her road trip. When Bonnie's mom's car breaks down near the Sleep Well motel, Mr. Pricklepants tells the toys that the roadside motel is a perfect location for a horror movie. 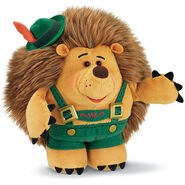 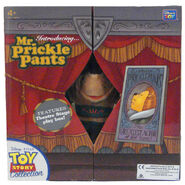 "Are you classically trained?"
—Mr. Pricklepants to Woody after Bonnie leaves the room

"Sunnyside is a place of ruin and despair, ruled by an evil bear who smells of strawberries!"
—Mr. Pricklepants tells Woody the dangers of Sunnyside

Mr. Pricklepants as the waiter who serves Barbie and Ken.