Ms. Davis (also known as "Andy's Mom" and "Mrs. Davis") is a minor character in the Toy Story series. She is the mother of Andy and Molly Davis. Her marital status has never been disclosed, making it unknown if she is a divorcee or a widow.

In Toy Story, Ms. Davis makes her first appearance. She gives Andy a Buzz Lightyear toy for his birthday, which causes jealousy in Woody. However, near the film's climax, Woody and Buzz became close friends. During Andy's birthday party, she injures one of the Army Men when she accidentally steps on him coming out of the kitchen, hurting her foot as well. Annoyed, she sweeps them aside with her foot remarking that she had asked Andy to pick them up.

In Toy Story 2, she holds a yard sale where she almost has Wheezy sold, until he is saved in time by Woody, with the help from Andy's wiener dog, Buster (who is now grown up). When Al McWhiggin finds Woody and gets ecstatic, she comes over to see what's the matter and takes Woody back, refusing all offers of money for him since she knows how much he means to Andy. Unfortunately, Al kicks a skateboard into one of her displays and then steals Woody while she is distracted.

In Toy Story 3, Ms. Davis is shown to be friends with Mrs. Anderson, the receptionist at Sunnyside Daycare. She has visibly aged by this point, approaching her mid-years, and remains a committed and loving mother to her children. She accidentally takes the bag containing Andy's toys which was to be put in the attic and places it out on the kerb, mistaking it for a trash bag. Her last appearance in the film is when she gets emotional upon seeing Andy's childhood bedroom emptied and hugs her son, wishing that she could always be with him.

Ms. Davis is a very loving and devoted parent who establishes fair rules for her children. However, like any parent, she often argues with Andy and Molly. 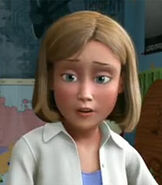 Ms. Davis, as she appears in Toy Story 3. 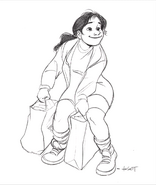 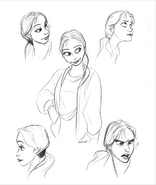 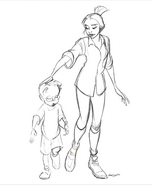 Add a photo to this gallery
Retrieved from "https://pixar.fandom.com/wiki/Ms._Davis?oldid=207142"
Community content is available under CC-BY-SA unless otherwise noted.