Murray Clutchburn is a minor character in Cars and Cars 3. He is a Stodgey/Suaver Ex. He races for the sponsor "Sputter Stop".

"Murray Clutchburn's first taste of competition was as a member of the 1984 gold winning Olympic test track relay team. You might recognize him from specially marked boxes of Wheelies Shredded Brakes! The momentum of the Olympics carried him straight into mainstream professional racing and a flourishing career in the Piston Cup series in 1985. Lauded for his classic image, Murray sometimes sports his signature exhaust side-burns that made him such a hit with the ladies back in the day."[1]

Murray Clutchburn returns Cars 3,[2] still racing in the Piston Cup after thirty-two years. However, following the race at the Los Angeles International Speedway, he becomes one of the last veteran racers, besides Lightning McQueen, to be replaced by a next-generation racer. 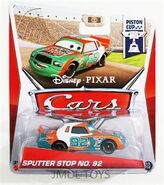