Ramsey: A fearless, whip-smart and no-nonsense Tyrannosaurus Rex rancher, Ramsey loves the challenge of driving a herd of longhorns with her father, Butch, and her little brother Nash. Ramsey has a lively, outgoing personality—she likes good jokes, tells a mean story and has a soft spot for those in need.[1]

Nash: An enthusiastic young Tyrannosaurus Rex, Nash lives for adventure, and loves when something unexpected breaks up the routine of rounding up longhorns with his father, Butch, and his big sister Ramsey. He isn’t the sharpest of spurs and has trouble keeping track of their herd, but his mischievous charm and positive attitude make him good company out on the range.[1]

Nash and Ramsey (mistaken for a whole bigger long-necked dinosaur by Arlo and Spot from a long distance at first) are first seen noticing Arlo and Spot coming their way, asking for help from someone to save them from Thunderclap and his gang, who are chasing them, and supposedly chase them until they notice them being attacked by the Pterosaurs. Nash and Ramsey finally save them from the Pterosaurs and let out a few roars.

Just when it seems that they are approaching to finish off Arlo and Spot as well, they actually reveal their true good nature when Ramsey is seen helping Arlo up. Nash asks if he's okay, Ramsey expresses her dislike of bullies, and scratches Spot's chin after cuddling beside her foot. Nash then messes with his sister and when she reminds him about boundaries and her personal bubble, the two begin to somewhat fight until their father, Butch arrives to break up the fight. Then, they offer to take Arlo to a water hole somewhere south, where he may find someone with information on how to get back to his farm in return for Arlo helping them find their lost herd of longhorns using Spot to track them down. Then, Ramsey tells them that Nash lost their herd, which Nash denies and simply states that they just "wandered off."

At first, when they see Spot having supposedly lead them all the way to a bug, which Spot later eats, they seem disappointed and Butch supposedly threatens Arlo that "if he's pullin' his leg, he's gonna eat his" until Spot calls them with a bark to show that he found the herd's tracks, a dead longhorn, and a feather belonging to the ones, in other words, "rustlers" as Butch refers to them as, that stole them in the first place.

When they finally find their herd and approach them quietly, Butch sends Arlo and Spot to get on a rock in the middle of the herd and scream real loud to attract the rustlers so that he and his kids could get them easily. After Arlo accomplishes that role (with Spot's help by biting him on the leg), the rustlers show up and are revealed to be velociraptors led by Bubbha. When they are about to attack them, Butch and his kids come to the rescue. Nash and Ramsey fight off Bubbha and Earl. When Butch gets overwhelmed by Lurleane and Pervis, Arlo finally has the courage to overcome his fears and save Butch from harm. When they are about to retaliate, Butch grabs them by their tails and throws them far away, which also causes Bubbha and Earl to retreat in fear. Then, the T-Rexes, Arlo, and Spot let out a few roars over their victory on the raptors.

At night, Nash offers Arlo to trade Spot for his bug harmonica while Ramsey plays with Spot, but when Arlo politely declines, Nash eats it. Then, the group share their stories on how they got their scars when they notice Arlo's scar on his right leg due to his last battle with the raptors around a campfire. Nash got into a fight with 15 Stegosaurus outlaws where one of them got his spike tail stuck in Nash's right leg and pulled it back out, and since then, he is unable to feel his toes (demonstrated by setting them on fire). Ramsey got her tail stuck between a rock and a hard place when a stampede of longhorns was coming right at her, so she chewed the tip of her tail off to get loose. But both of them enjoy hearing their father's story, with Nash wishing to touch the croc's tooth, which Butch has stuck in his gums as a souvenir and refuses to allow him to touch too. When Arlo notices the first snow, meaning winter is coming, the T-Rexes fulfill the rest of the deal by promising to help take him back home in the morning.

The next day, as they are herding along with Arlo's help too, Arlo sees Clawtooth Mountain and the T-Rexes wish him luck on his journey. They aren't seen again for the rest of the film.

Ramsey catches Thunderclap in her jaws.

Nash and Ramsey alongside Butch, Arlo and Spot 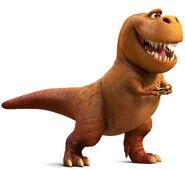 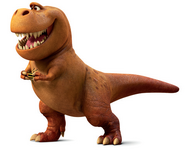 Retrieved from "https://pixar.fandom.com/wiki/Nash_and_Ramsey?oldid=202493"
Community content is available under CC-BY-SA unless otherwise noted.