Nigel Gearsley is a character in Cars 2.

"Nigel Gearsley from Warwickshire, England, is an Aston Martin DBR9 racer bearing #9. He got his start racing the Speed Hill Climb—a unique, completely uphill race through the Aston Hill Mountain Area that his family has run for generations. Nigel’s racing career has been anything but an uphill challenge, as he’s won nearly every start in the past few years on the Grand Touring Sports Car circuit, including a string of podiums at Nurburgring and Le Mans. His cool British refinement makes him an imposing presence on the World Grand Prix courses."[1]

Nigel competed in all three races of the World Grand Prix, and at the Radiator Springs Grand Prix. His first appearance was at the Tokyo welcome party, shocked with the other World Grand Prix racers as they watch Mater drinking from the fountain. The Tokyo race was Nigel's best performance. He went up to fourth position in the dirt section, and came in fifth place at the end of the race. In that race, his pit was at the end of the pit row, with Miguel Camino's pit on the left. In the Porto Corsa race, Nigel was following Carla Veloso in the fourth position. But then his motor blew up, hit by the electromagnetic pulse generator of the lemons, and he was retired from the race. He is the second car to have his motor exploded by the lemons during that race, and the fifth car in general to be hit by the pulse. However, he got fixed and was able to race in London. During this final race, Nigel was between sixth and eighth position. His pit was in between those of Lightning McQueen and Francesco Bernoulli.

Retrieved from Stitch Kingdom via the Web Archive.[2]

Nigel in front of Francesco and Lightning on a promotional poster

Nigel getting hit by the radiation beam 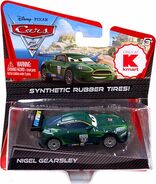 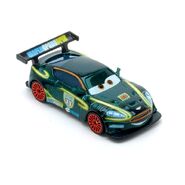 Neon Racers Die-cast
Add a photo to this gallery

Retrieved from "https://pixar.fandom.com/wiki/Nigel_Gearsley?oldid=191880"
Community content is available under CC-BY-SA unless otherwise noted.