Onward is the 22nd Pixar film about a "suburban fantasy world" which was first announced at the 2017 D23 Expo. Directed by Dan Scanlon and produced by Kori Rae; both of whom previously worked on Monsters University, the film released on March 6, 2020.[2] The voice cast includes Chris Pratt, Tom Holland, Julia Louis-Dreyfus, and Octavia Spencer.[3]

Set in a humanless world of elves, trolls, sprites, and "pretty much anything that would be on the side of a van in the '70s", the movie follows two teenage brothers whose father died when they were young; now, they're "on a quest through this mundane, modern fantasy world to somehow find a way to spend one last magical day with their father."

Dan Scanlon also described more details about the "modern suburban fantasy world" the film inhabits. It's a world where magic existed long ago, but because of difficulty and complication, people simply lost interest and instead created machines to do both the magic and the mundane. "The world is basically a mix of the fantastic and the everyday", Scanlon explained as concept art showed slices of recognizable suburbia, albeit with goblins and creatures. "There are mushroom houses that line the streets with satellite dishes sticking out the top of them and a minivan parked in front of each one. There are no humans... but there are winged unicorns everywhere. They're basically rodents, possums eating all the trash out of your bins."

The film is inspired by the death of director Dan Scanlon's father, when he and his brother were younger, and their relationship. Scanlon decided to write the story after hearing an audio clip of his father.[7]

Director Dan Scanlon provided information regarding some of the voice cast selections[3]:

According to the filmmakers, they’ve assembled a dream voice cast to help bring key characters to life.[3]

The first official poster and first look at the movie were released on May 30, 2019, with the first look airing during the NBA Finals.[8][9]

On October 10, 2019, a new trailer for the movie was released. On December 17th, a second trailer was released.

On January 1, 2020, the first two sneak peeks aired during commercial breaks of the "Player Select" 1-Up New Year's marathon on Disney XD (USA).

On March 6, 2020, the new short film based on "The Simpsons", "Maggie Simpson in Play Date with Destiny" is playing before the movie starts. 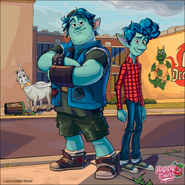