Jeff Garlin
Otis is a character in Cars 2.

"Otis is no stranger to the tow hook in Radiator Springs. He's broken down more times than Mater's cousin Betsy after she got left at the altar. He's an old jalopy who wasn't quite up to snuff even when he left the factory, and life's been a challenge ever since. New parts are not available, and he's reached the limit on his roadside service card. In fact, Ramone has repaired him almost weekly for the past few months. Poor Otis just wants to spend some time on the open road...trouble free."[1]

Otis arrived in Radiator Springs sometime before the events of Cars 2. In the movie, he was first seen broken down on the side of the road on his way to Radiator Springs. Then Mater comes by and gives him a tow. He apologizes to Mater that he couldn't make it. He really thought he could make it. When Mater sees that Lightning McQueen is back home, he rushes to go see him, forgetting he was towing Otis, and Otis was getting dragged causing some sparks. When Mater finally got to McQueen, he accidentally let go of Otis, sending him spinning out into Ramone's House of Body Art. Sally and Flo got out of the way so he wouldn't crash into them. In the shop, Ramone asks how far he made it, and Otis says he made it half way across the county line.

He appears a final time at the end of the movie. When Mater uses his spy rockets that Shiftwell and McMissile let him keep, he speeds right by Otis (who is broken down yet again), picking him up immediately and towing him again, but this time he's going so fast, Otis is actually having a nice time.

Otis is a sweet car with a ton of charm, persistence and a nice sky-blue color, but also a "lemon", a car with flaws. Otis is embarrassed by the fact that he is a "lemon" but unlike Acer and Grem, he accepts it, and because he accepts it, so does everybody in town. 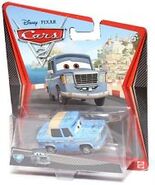 Mater: "Hey, Otis!"
Otis: "Hey, Mater! I... Oh, gosh. I'm so sorry. I thought I could make it this time, but..." (tries to start his engine, but can't) "Smooth like pudding, huh? (sighs) Who am I kidding? I'll always be a lemon."
Mater: "Well, dad-gum! You're leaking oil again! Must be your gaskets." (hooks his tow hook on Otis and starts to tow him) "Hey, but look on the bright side. This is your 10th tow this month, so that means it's on the house!"
Otis: "You're the only one that's nice to lemons like me, Mater."
Mater: "Hey, don't sweat it! Shoot, these things happen to everybody, Otis."
Otis: "But you never leak oil!"
Mater: "Yeah, but I ain't perfect. Don't tell nobody either, but I think my rust is starting to show through." (they pass by the billboard).
Otis: "Hey, is Lightning McQueen back yet?"
Mater: "Not yet."
Otis: "He must be crazy excited about winning his 4th Piston Cup! 4! Wow!"
Mater: "Yeah, we're so dad-gum proud of him. But I sure wish he'd hurry up and get back, 'cause we got a whole summer's worth of best friend fun to make up for, just me and..." (he gasps as he sees that Lightning McQueen is back, so he rushes to him, but he forgets he's towing Otis) "...McQueen!"
Otis: "Whoa! Whoa! Whoa!"
Mater: "McQueen!"
Otis: "Mater, I'm in no hurry! You don't need to go so fast!"
Mater: "Hey, everybody! McQueen's back! McQueen's back! McQueen's back! McQueen's back! McQueen's back!"
Otis: "Ahh! Aaah! Aaah! Oooh-hoo! Oooh-hah!"
—Mater towing Otis.

Ramone: "Hey, how far did you make it this time, Otis?"
Otis: "Halfway to the county line."
Ramone: "Ooh, not bad, man!"
Otis: "I know! I can't believe it either!"
—Otis arrives at Ramone's House of Body Art.

"Thanks, Mater!"
—Otis, after Mater towed him to Ramone's with his rockets.

Русский
Community content is available under CC-BY-SA unless otherwise noted.