P.T. Flea's Circus is P.T. Flea's big top circus in A Bug's Life. The circus tent is composed of a secondhand red and white umbrella, while P.T.'s wagon consists of two old empty boxes of Casey Jr. cookies, which he conveniently uses when traveling with the circus.

It consists of four main acts (not including P.T.'s Flaming Death act): Manny and Gypsy, Dim and Rosie, Tuck and Roll, and Heimlich, Francis and Slim.

After P.T.'s act goes horribly wrong, he fires the troupe. After they all leave for Ant Island with Flik, the circus goes out of business.

However, P.T. turns up on the island sometime later and reveals the bugs as circus clowns (not warriors like they had claimed). P.T. says that his flaming death act was a huge hit and he wants them back.

At the end of the film, the circus bugs leave with P.T., a reformed Molt, and a group of acrobatic ants and head back to the city. By this time, Heimlich has grown wings and is now a beautiful butterfly. 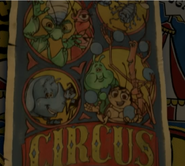 Add a photo to this gallery
Retrieved from "https://pixar.fandom.com/wiki/P.T._Flea%27s_Circus?oldid=179859"
Community content is available under CC-BY-SA unless otherwise noted.