Party Central is a Pixar short film based on Monsters University. After being premiered at the 2013 D23 Expo, it was released with the theatrical release of Muppets Most Wanted on March 21, 2014.[2]

Mike and Sulley are visiting Monsters University for the weekend. The Oozma Kappas are throwing their first party, but no one shows up. However, Mike and Sulley have a plan to liven up the house. Using a borrowed door station, they sneak into a party at the Roar Omega Roar fraternity and steal all of its food and guests to fill the Oozma Kappa house. The supply runs take them through the closet doors of a married couple's bedroom, repeatedly disturbing their sleep.

Once they have the party fully stocked, Scott "Squishy" Squibbles' mother Sheri walks in on it while doing a load of laundry. She is angry with the fraternity, but only because they did not invite her. After lighting a bonfire on the lawn, Sheri introduces the crowd to "door jamming." This involves jumping from the roof and landing safely on the lawn after passing through the two doors, to the humans' terror. The guests congratulate the Oozma Kappas along with Mike and Sulley for putting together such a great party.

In a post-credits scene, the husband and wife wake their son up and ask if they can sleep with him. They say that there is a monster in their closet, to which their son replies, "That's what I've been trying to tell you!"

Party Central was made to be included on the home video release of Monsters University, but was given a theatrical release instead.[2][4][5] The short premiered at the D23 Expo 2013.[1] It was set to be released with the theatrical release of The Good Dinosaur. After The Good Dinosaur was pushed back to November 2015, there had been no official word on when the short would be released. On January 7, 2014, it was announced that it would be theatrically released with Muppets Most Wanted.[2]

Party Central has received a PG rating from the MPAA (for some reckless behavior), unlike the two Monsters, Inc. films which are both rated G.[6] It is Pixar's first PG-rated short, and also the first animated short film owned by Disney to have that rating since 1990's Roger Rabbit short film Roller Coaster Rabbit.[7] 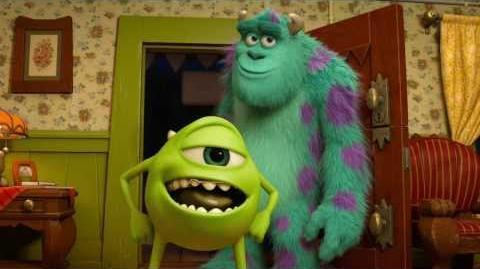