Partysaurus Rex[2][3][1] will be the third episode in the Toy Story Toons series. It will be a Pixar Canada production.[3] The short has been rated G by the MPAA.[4]

Electronic artist BT, who composed music for the short, said about it: "I'm in the middle of scoring a film for Pixar right now. It's a short for Toy Story and I'm not allowed to say the whole story, but quite literally, it's like a Toy Story rave - and I'm actually not kidding either. The toys get into all these shenanigans and it's like pounding club music. So it's really not very Pixar, but in a really hysterical way, everyone laughs really hard when they see it."[5] Disney has also announced a bath set called the "Partysaurus Boat" based on the short Partysaurus Rex, and that will be released near the holiday season.[6][7] The short will be released with the theatrical 3D release of [[Finding Nemo|Finding Nemo]].[8]

One of the two images revealed

The other image revealed 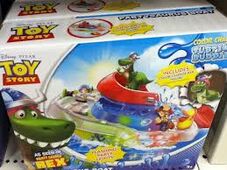 A toys from the short

the party getting started

pirate boat toy
Add a photo to this gallery

Retrieved from "https://pixar.fandom.com/wiki/Partysaurus_Rex?oldid=86301"
Community content is available under CC-BY-SA unless otherwise noted.