"Can't hear you, Peach."
—Other members of the Tank Gang, when Peach's voice is muffled against the glass.

She is a sharp-eyed starfish that makes the perfect lookout, because she enjoys being in one place for a long time. Peach likes to count how many cups of coffee the dentist drinks, so the fish can guess his next bathroom break and carry out their escape plans while he's away.

Peach watches every move the dentist makes and can be relied upon to relay the latest hot news from the surgery to the trivia-hungry Tank Gang.

Peach is sensitive as she looks out for new arrival Nemo as if he is a younger brother—protesting when he is sent on a mission to jam the tank's revolving fan. She even worries about him in the frankly phony Ring of Fire ceremony, despite the volcano being plastic and not having real fire.

"This sensitive starfish takes an immediate liking to Nemo and protects him like a big sister. She doesn't like to see the little clownfish in danger, and protests when Nemo is sent on a scary mission to jam the tank's revolving fan. She even gets anxious during the Ring-of-Fire ceremony, pointing out that Nemo is young―although the ritual doesn't involve any real fire at all, just a few bubbles. Her heart is in the right place, although nobody is quite sure exactly where that is..."[1]

Peach is usually seen attached to the side of the tank watching the dentist do his dental work. She announces what is going on to the rest of the Tank Gang, however, whenever Peach speaks, her voice is muffled against the glass (which is a running gag) and one of the other fish would say, "Can't hear you, Peach." She then unsticks herself from the glass so the gang can hear her clearly. At the end of the film, Peach can be seen moving up with the credits while clinging onto the screen. She suddenly falls off, but immediately gets back onto the screen and disappears off the top of the screen.

After the credits, Peach, along with the rest of the Tank Gang are still in filthy plastic bags. They have floated to the outside of the Marine Life Institute. They are then taken into the institute by some employees, much like Dory earlier in the film.

She and the rest of Tank Gang watching the dentist 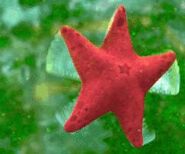 Excited about the day until she learns the tank is clean 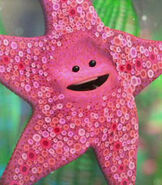 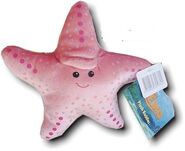