Petrov wasn't clearly seen anywhere in the movie, but concept art[2] shows a light green Trunkov, that appears to be Petrov, in the airport chase scene. However, the car in question doesn't appear in the final movie, and seem to have been replaced by Grem. There was also an airport playset released called the Cars 2 Spy Jet Escape playset which shows Grem and Petrov chasing Mater in the background, instead of Grem and Acer like in the movie. Interestingly, the set was released before the movie, as well as the die-cast for Petrov. It can also be noted that Petrov is included in the LEGO Cars 2 set 9483: Agent Mater's Escape as the operator of the Lemons' camera at Porto Corsa. This evidence suggests Petrov was originally meant to be a major henchman, similar to Acer and Grem. 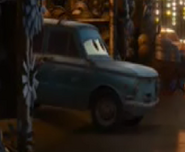 Retrieved from "https://pixar.fandom.com/wiki/Petrov_Trunkov?oldid=149999"
Community content is available under CC-BY-SA unless otherwise noted.