The Piston Cup is an annual racing series in the world of Cars, and is central to the events of Cars and Cars 3 while being mentioned in Cars 2.

It appears that the origins of the Piston Cup are tied to moonshining (like those of the real-life racing organization, NASCAR). The 1951, 1952 and 1953 Piston Cups were won by the Hudson Hornet. The 1954 Piston Cup saw Hudson Hornet suffer a major crash which forced him to quit the racing world, which occurs before the events of first film. Other contestants from that era were Louise Nash, River Scott and Junior Moon. Some circuits that were in use in this time are the Thomasville Speedway, the Thunder Hollow Speedway, and Fireball Beach.

As seen in Cars, the 2006 Piston Cup was a heated battle between The King, Chick Hicks, and Lightning McQueen. The three racers started the final race of the season, the Dinoco 400 at the Motor Speedway of the South, with the same number of season points, making the winner of the race the winner of the cup. After an eventful race, where McQueen got close to one lap of advance on the rest of the field and then nearly lost the race after blowing two tires on the last lap, The King, Chick Hicks, and McQueen tied three-way. A tiebreaker 200-lap race was held a week later, at the Los Angeles International Speedway. The King initially held the lead, followed closely by Chick, but Lightning quickly fell behind as he was thinking of his friends at Radiator Springs. However, they came to serve as his pit crew and cheered him on, given him the confidence to catch up to his rivals. In the final lap, Lightning takes the lead, and Chick, fed up with coming second to The King, deliberately sends him rolling off the speedway, causing him to crash violently. Lightning sees this and stops at the finish line to go back and help The King, letting Chick win instead. Lightning then helped The King cross the finish line, allowing them both to finish with dignity. A total of 36 cars competed in the series and three tracks are known.

Chick Hicks was the official winner of the 2006 Piston Cup, as well as his first title, but his fans and media were outraged at his behavior on the track and booed him for being a cheater. They pelted Chick with debris, forcing him off the stage in humiliation. Lightning was hailed for his good sportsmanship on the track, thus being deemed the "true" winner of the race.

At the time of the events of Cars 2 the cup was renamed the Hudson Hornet Piston Cup in memory of the deceased Doc Hudson, a former Piston Cup racer. McQueen won the cup in question, giving him a total of four Piston Cups at that time.

In Cars 3, Jackson Storm enters the sport. An all-new generation of racers follows suit, forcing the older generation to retirement. Storm went on to win the Piston Cup in his rookie year, while McQueen suffered a major crash and could not finish the season. Prior to Storm's debut, McQueen continued to have fun and win races, competing with his newest friendly rivals Cal Weathers and Bobby Swift.

The following Piston Cup season began with the Florida 500, during which a returning McQueen started the race and was replaced by the rookie Cruz Ramirez halfway through, leading them to a joint victory. Some of the circuits used at this time are the BnL Raceway, Copper Canyon, Grandol Oil Co. Raceway and Rustbelt Raceway, plus the return of the Motor Speedway of the South and the Los Angeles International Speedway. 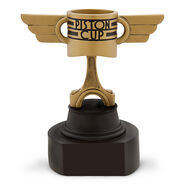