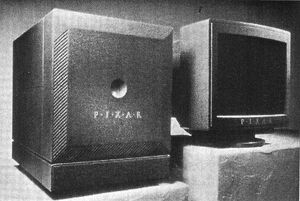 The Pixar Image Computer was a graphic designing computer originally developed by the Lucasfilm Computer Division (later renamed Pixar) in May 1986, intended for the high-end visualization markets, such as media production and medicine.

In an attempt to gain a foothold in the medical market, Pixar donated ten machines to leading hospitals and sent marketing people to doctors' conventions. However, this had little effect on sales, despite the machine's ability to perform CAT scans and show perfect images of the human body. Pixar did get a contract with the manufacturer of CAT Scanners, which sold 30 machines. The terms were: Buy a million dollar scanner, and get a $30,000 3D visualization system free. However doctors were not trained to look at 3D, and could be sued unless they looked at the individual slices, per their training. By 1988 Pixar had only sold 120 Pixar Image Computers.

In 1988, Pixar began the development of the PII-9, a nine slot version of the low cost P-II. This machine was coupled with the world's first RAID, a high performance bus, a hardware image decompression card, 4 processors (called Chaps or channel processors), very large memory cards (VME sized card full of memory), high resolutions video cards with 10-bit DACs which were programmable for a variety of frame rates and resolutions, and finally an overlay board which ran NeWS, and the 9 slot chassis. A full-up system was quite expensive, as the 3 GiB RAID was $300,000 alone. At this time in history most file systems could only address 2 GiB of disk. This system was aimed at high-end government imaging applications which were done by dedicated systems produced by the aerospace industry which cost a million dollars a seat. The PII-9 and the associated software became the prototype of the next generation of commercial "low cost" workstations.

In 1990, the Pixar was defining the state-of-the-art in commercial image processing, however the government decided that the per-seat cost was still too high for mass deployment, and to wait for the next generation systems to achieve cost reductions. This decision was the catalyst for Pixar to lay off its hardware engineers and sell the imaging business. There were no high volume buyers in any industry. Less than 300 Pixar Image Computers were ever sold.

The Pixar Image computer business was sold to Vicom in 1990 for $2,000,000. Vicom filed for Chapter 11 within a year. Many of the lessons learned from the Pixar Image Computer made it into the Low Cost Workstation (LCWS) and Commercial Analyst Workstation (CAWS) program guidelines in the early and mid '90s. The government mass deployment that drove the PII-9 development occurred in the late 1990s, in a program called Integrated Exploitation Capability (IEC).

Retrieved from "https://pixar.fandom.com/wiki/Pixar_Image_Computer?oldid=88427"
Community content is available under CC-BY-SA unless otherwise noted.