The Pizza Planet truck is a 1978 Gyoza Mark VII Lite Hauler pickup truck that is used to make deliveries for Pizza Planet in Toy Story. It has made cameos in every Pixar film to date except The Incredibles, though it appears in its video game adaption.

Woody: "Buzz! Buzz, come back!"
Buzz: "Go away!"
Woody: "No! Buzz, you gotta come back! I...I found a spaceship! It's a spaceship, Buzz!"
―Woody labels the Pizza Planet truck as a spaceship in order to call Buzz Lightyear back[src]

Buzz: "Now, you're sure this space freighter will return to its port of origin once it jettisons its food supply?"
Woody: "Uh-huh. And when we get there, we'll be able to find a way to transport you home."
Buzz: "Well, then, let's climb aboard."
Woody: "No, no, no, wait, Buzz! Buzz! Let's get in the back! No one will see us there."
Buzz: "Negative! There are no restraining harnesses in the cargo area. We'll be much safer in the cockpit."
Woody: "Yeah, bu... Buzz! Buzz!" (pause) "Buzz!" (to himself) "'It's safer in the cockpit than the cargo bay.' What an idiot!"
―Woody and Buzz Lightyear, as they discuss how they will hitch a ride in a Pizza Planet truck[src]

"Oh, I seriously doubt he's getting this kind of mileage."
—Hamm, reading the manual of the truck
"Guys, we can't park here, it's a white zone!"
—Rex, after the toys stop the truck at the airport

Toy Story
At the Dinoco gas station. Buzz and Woody ride in it.

Toy Story 2
In the Cutting Boulevard apartment parking lot. The toys actually drive the truck to follow Al to the airport.

Cars
During the "Life is a Highway" sequence, in front of a Dinoco station, thus echoing the scene in Toy Story.

Up
Seen in the parking lot behind the curb where Carl, Russell and Dug are sitting at the end.

Toy Story 3
Lotso, Chuckles and Big Baby ride on the Pizza Planet truck's rear bumper in the rain at night to get from Daisy's house to Sunnyside Daycare during Chuckles' story.

Brave
As a wooden trinket on a worktable in the Witch's cottage, as a way to bypass the fact Brave is set before cars were invented. This is the first time the truck does not appear as a real truck.

Monsters University
Parked next to the JΘX house at the first party. It receives some modifications to fit the monster world, like a six-wheel configuration, more pointy lights, and different proportions.

Inside Out
The truck appears in a gold memory orb in the foreground when Joy and Sadness first meet Bing Bong. Director Pete Docter says the Pizza Planet Truck appears a total of three times in the film, but that it is very hard to see.[2][3]

Inside Out
The truck's second appearance, which appears in a memory orb just like the others.

Inside Out
The truck's third appearance when Bing Bong, Joy, and Sadness successfully depart the Train of Thought.

The Good Dinosaur
As an asteroid in the opening shot, in the top left portion of the frame. Peter Sohn has indicated that the truck makes a second appearance in the film, which has not yet been identified.[4]

Finding Dory
The truck appears in a wrecked sunken state in the area where Dory, Marlin and Nemo encounter the Giant Squid.

Cars 3
Todd in the demolition derby.

Cars 3
A car crashes into Todd who loses his rocket in the crowd.

Coco
Seen driving past when Miguel looks outside the window.

Incredibles 2
Seen parked in an alley after Elastigirl defeated the false Screenslaver, indicating that the Pizza Man whom Evelyn abducted worked there.

Toy Story 4
As a tattoo on Axel the Carnie's leg as he spots Buzz Lightyear and picks him up.

Onward
At the toll gate when Ian and Barley start their adventure by heading to the Manticore's Tavern. The text on the rocket reads "Pizza Realm", as to keep in tone with the fantasy theme.

Soul
As a one of the artifacts on Hall of Everything.

Turning Red
Parked alongside a curb as Mei heads to the 4*Town concert at the SkyDome.

Toy Story of Terror!
Depicted on a Pizza Planet flyer posted on the wall in Ron the manager's office.

Toy Story That Time Forgot
Made of LEGOs, in Mason's house.

The Incredibles video game in the third level

LEGO The Incredibles next to a guy in a banana costume. 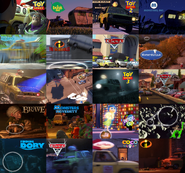 Todd has been spotted in the Cars 2 triptych poster, in the middle London portion, near a fountain in the background. 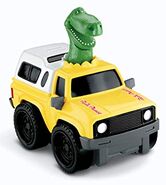 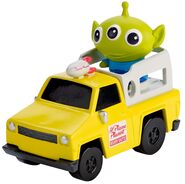 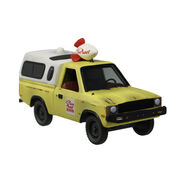